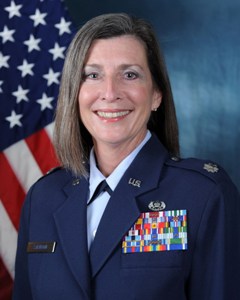 May 2010-May 2011, Lt Col Stenton deployed to Kabul, Afghanistan where she was the Legal Advisor for the Afghan AirForce and Afghan National Army Staff Judge Advocates. Prior to entering the Air Force she was an investigator for the Camden County Prosecutor’s Office for five years and was a member of the Army National Guard for four years initially serving as an MP.  Lt Col Stenton was a prosecutor, defense counsel, senior prosecutor, chief of military law and a certified military judge.  Professor Stenton was an adjunct professor of Family Law at Butler County Community College.  She has extensive experience training both US Air Force Judge Advocates, on the Uniform Code of Military Justice and criminal law, as well as international Legal Advisors on their countries military criminal justice systems.

Professor Stenton graduated Rutgers School of Law, Camden with a J.D. in 1990 and West Chester State University with a B.S. in Criminal Justice in 1982.  She is admitted to practice law before the Supreme Court of New Jersey, the Supreme Court of Pennsylvania, The United States Court of Appeals for the Armed Forces and the U.S. Supreme Court.