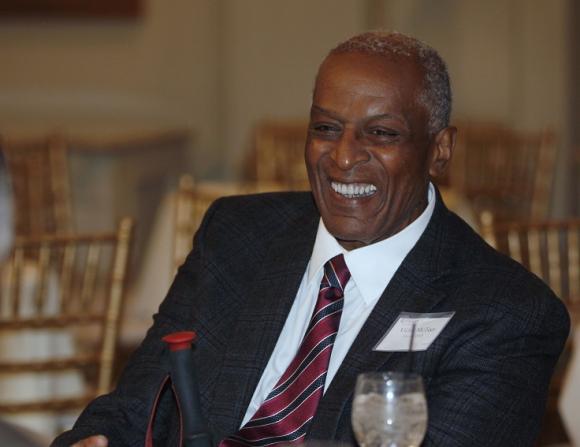 Victor McTeer RLAW ’72 and his wife Mercidees “Dee Dee” have funded two summer internships for Rutgers Law students to participate in the Center for Constitutional Rights in its new southern office in Jackson, Mississippi.  The Victor McTeer Social Justice Internships will offer valuable career experience to students and cement the strong relationship between the Center, which is headed by MSP Alumni Vincent Warren RLAW '93 and Associate Executive Director Donita Judge RLAW '03.

McTeer joins Oliver Quinn RLAW ‘75, who funded two internships last summer as a memorial for the late professor Alfred Slocum RLAW ’70, who taught at the law school from 1970 to 2001, and who was a co-founder of the Minority Student Program.  The Slocum public service internships fund students performing summer work at the New Jersey Institute for Social Justice.  McTeer also joins members of the Rasool family, Tim RLAW'92 and his two daughters, Nia RLAW '05 and Jasmine RLAW'14, who this year started the Rasool Family Social Justice Internship.   These new internships support the strong initiative created by James Maida RLAW ’90 and his wife Sharon five years ago in establishing the James and Sharon Maida Public Interest Fellowships open to all students in Newark and Camden.

McTeer’s path to Rutgers Law encompasses both the Civil Rights Movement of the 1960s and the People’s Electric Law School. He said, “I first met Lawrence Guyot in the Summer of 1969, when he was a Black Mississippi civil rights activist who had been beaten many times while protesting on behalf of Black people across the State. But he was most well known as the strident ‘no holds barred’ strategist and director of the Mississippi Freedom Democratic Party who in 1964-65 joined with former Rutgers Law School Professor Arthur Kinoy, Bill Kunstler, Mort Stavis, and Ben Smith to dare challenge the seating of the entire white Mississippi Congressional delegation in the U.S. House of Representatives.

Those white men were elected in white-only Democratic Primary elections under state laws that denied Black and indigenous people of color from the polling booth.  The Black challengers lost in Congress, but won in the hearts of people across the nation, including the lawyers named above, who then formed the New York based Center for Constitutional Rights.”

“By 1969, Guyot was civil rights royalty, loved by Black folk across the Nation and hated by many Southern whites for his courage, audacity, and strategic brilliance, while I was simply a Black graduate of an otherwise all-white undergraduate school trying to give meaning to my future, by spending a summer working for people of color in a poor black Mississippi Delta community whose cotton fields were nothing like the middle-class urbane Baltimore neighborhood where I was raised. Or so I thought.”

“Guyot was already admitted to Rutgers Law School at the time we met. Despite being 10 years younger, he suggested that I also apply to become a law student at Rutgers under Professor Kinoy.  Hell, I just wanted to change the world like he already had.  Perhaps he saw something in me that I did not see.  At least, not then.  Guyot and his wife Monica were principled and visionary people who took me under their wings and perhaps knowingly offered the opportunity of a lifetime; as did Rutgers, as did Mort Stavis; and as did Arthur Kinoy.

They were not unlike the poor Black folk of the rural Mississippi Delta who would come to entrust Dee Dee and me with their lives, their problems and fears, and those of their progeny for more than a generation. Dee Dee and I found trust in the Delta and caring folk who took us in and gave us a chance and opportunity to live and work for them and their dreams.  We hope that others will follow this example to take their dreams and high expectations to the communities that envisioned their return.  Like I said: ‘Winning for good folk has its own reward.’  They take care of you and your family as one of their own for a lifetime and beyond.  They will never forget what you did when it counted.”