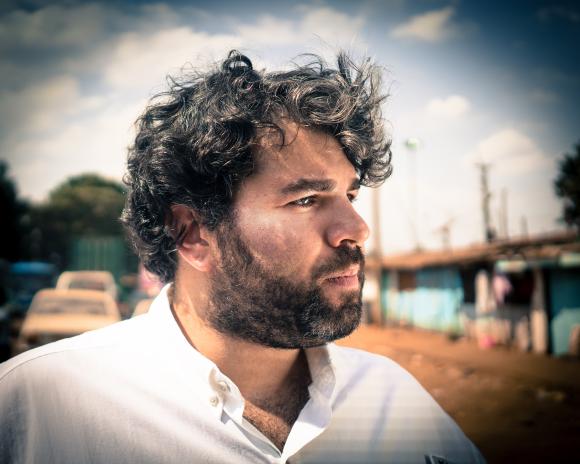 David Lehman '15 said his legal skills helped him open a not-for-profit organization that teaches children photography and business skills around the world.

When David Lehman graduated from Rutgers Law School and passed the New York bar exam in 2015, he combined his law degree with his passion for photography.

Lehman, a New York native, who warmly remembers participating in the Street Law program during law school, used his legal skills to form a 501(c)3 non-profit foundation called Photo Start. Photo Start is based in New York City and uses photography as a vehicle to teach life and business skills children around the world who are at risk from street gangs and terrorist groups.

Lehman’s first stop was the Mathare Slum in Nairobi, Kenya, where he began holding photography classes for children aged 6 -16. “Working with the kids was a gift. They were so talented, and curious. We worked with them every day on a small roof in Mathare. We often walked through the Valley. A highlight was taking them to Nairobi National Park, a game park and heritage site just outside of the city. Most had never been in a motor vehicle or left the slum before, and we were visited at a very significant time. Nobody will forget that day.” he said.

The students took photographs of people, wild animals, nature - themselves - and their daily lives. Lehman printed the photographs which were exhibited at the Kenya Cultural Center in Nairobi this past Spring. With further involvement from the French Foreign Service, Lehman continued his program throughout the year. “We just completed a three week exhibition at Alliance Française in Nairobi, and it was terrific. The people came out to support us. We had students hired to shoot jobs. We sold prints, more. We’ve been blessed with very strong supporters as well as strong partners. But we always need more!”

Lehman is quick to point out that he isn’t just teaching photography to the residents of Nairobi, His goal is to provide young people with practical skills that will enable them to get work and better their circumstances. To ensure the program’s growth and long term success, Lehman started a training program so those students who excel can become mentors and trainers, and will help build the program for future students, and create relationships in the community.

Lehman divides his time between Nairobi, Jacmel, Haiti and his home base in New York City, where he volunteers with Legal Aid when he is not running his non-profit organization. Lehman will return to Nairobi in December. By the end of 2016, he will have worked with 450 young people and their families.

He credits Professors Gary Francione, Fadi Shaheen, and Alan Hyde, with inspiring him during law school, and former Dean Andy Rothman for helping him get through it all. “It’s great to be versatile,” he said of his legal interests. “I was able to apply [my knowledge] to business. It goes together perfectly. I am grateful for my time at Rutgers - it certainly had a strong impact on me - and I’m excited to continue using my legal and business acumen to serve and advocate for others.”