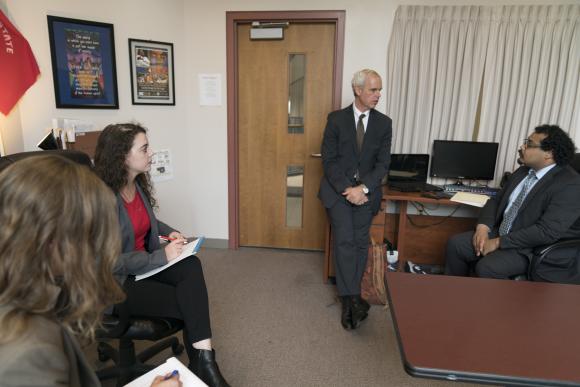 Thanks to a major federal grant administered by the New Jersey Attorney General’s Office, crime victims across the state of New Jersey are now eligible for free legal assistance from the Rutgers Crime Victims Law Center, a division of the Rutgers Law Associates, an in-house non-profit law practice housed at Rutgers Law School’s Newark and Camden locations.

Under the grant, Rutgers Law Associates was able to expand its legal team and create within the program the Rutgers Crime Victims Law Center, to provide legal services to victims of crime who need assistance related to their victimization.

"Some examples include obtaining final restraining orders (FROs) against their assailants and helping them divorce their abusive partners, and we assist with child custody and visitation issues," said attorney Patrick Severe. "We have also helped victims of elder abuse, including one who was induced into a fraudulent deed transfer, stripping him of his home ownership, and we are assisting a parent of a minor whose minor daughter was repeatedly raped by her second husband, seeking to protect their younger child from contact with the perpetrator."

To ensure quality representation and sensitive treatment of this vulnerable population of new clients, the entire team earlier this year undertook a 40-hour training program designed for all service providers of victims. “The overwhelming majority are domestic violence victims,” said Rothman. “We serve that population first to protect them from their abusers at trials, getting them final restraining orders or civil restraints, and then following up to address their other legal needs.” Rothman said many victims also have housing, employment, child custody and support, and immigration issues.

The state Attorney General’s Office funded the Crime Victims Law Center with a grant from federal funds generated under the Victims of Crime Act, and Rothman said he hopes to continue the Center permanently. He said most crime victims do not have the financial resources to get help from an attorney and can be at risk of becoming homeless, losing custody of their children, and being revictimized by their abusers.

He said that without representation, victims have a much lower likelihood of winning court-ordered protection, and that in nine months of operations since the Center opened the nine attorneys currently working at Rutgers Law Associates have helped almost 50 crime victims and conducted more than a dozen full trials during the pandemic.

“We’re working to become one of the state’s premiere providers of domestic violence legal assistance,” he said. “It’s important that their lives be touched by a lawyer.”

Severe agreed, "I find that this advocacy is sorely needed as many are unaware of the services available to them or how to even begin the legal actions necessary to seek redress. While some other state agencies and nonprofits help some victims, the need vastly outpaces the supply of available assistance and I am proud to be part of a program that is seeking to increase access to justice in the state."

Rothman said he hopes the Crime Victims Law Center can expand its work to meet the capacity of crime victims in New Jersey who need legal assistance.