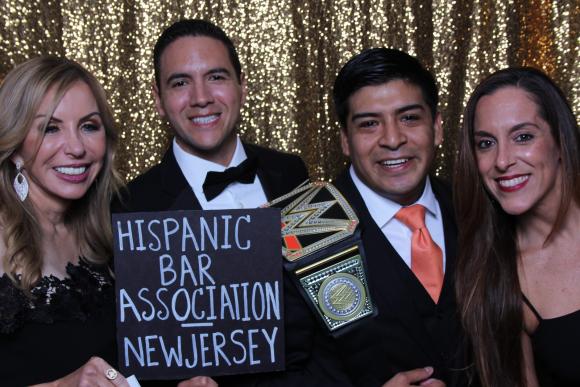 Nine Rutgers Law students from Newark and Camden were awarded scholarships by the Hispanic Bar Association of New Jersey at its June 2019 gala.

Armando Alfonso received the Day Pitney LLP Scholarship. He is a 1LE student in Camden. Alfonso was born in Trenton and graduated from Rutgers University's School of Engineering in 2013 with a focus on civil and environmental engineering. After graduation, he worked in commercial and residential real estate development, including site design, construction, and environmental complaince. Alfonso attends law school at night. During the day, he works full-time for the New Jersey Department of Environmental Protection where he assists urban communities remediate environmental issues. He hopes to use his law degree to continue to assist underserved communities in New Jersey. 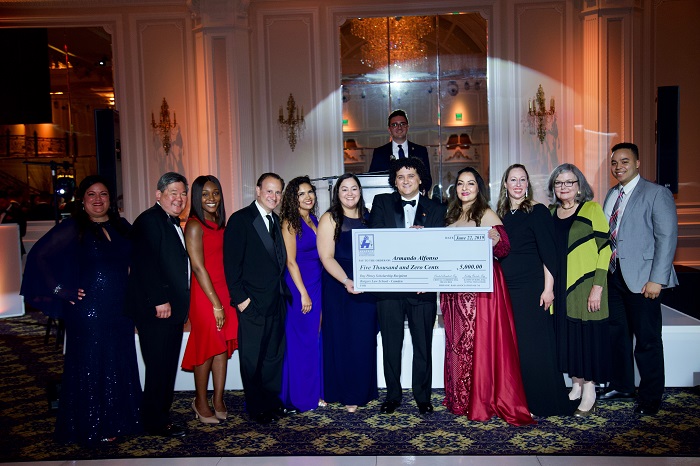 Juan Carlos Estrada won the Sterling National Bank Scholarship. He is a rising 2L at Rutgers Law School in Newark. He is originally from Texas, where he attended the University of Texas-San Antonio. After graduation, he worked at the Texas House or Representatives as a legislative aide to State Reprsentative Joe Farias. After working in government, Estrada moved to New York City and worked at Weitz & Luxenberg, P.C. in the Environmental Torts and Consumer Protection Unit. He is the 2019-2020 Co-President of the Association for Latin American Law Students (ALALS), a member of the Minority Student Program, Moot Court Board, and the Criminal Law Society. He also volunteers with Community Voices Heard, United We Dream, and Make the Road New York. 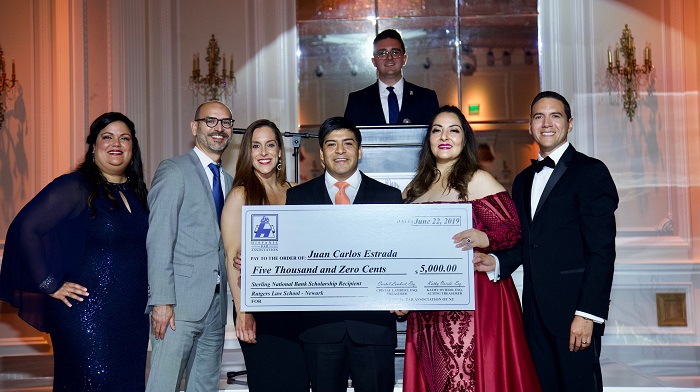 Diana Felipe received a Huson Court Reporting Scholarship. She will be a third year student at Rutgers Law in Newark this fall. She was born in the Dominican Republic and moved to Washington Heights in New York City at the age of six. She graduated from St. John's University with a bachelor of science degree in legal studies. During her first year of law school, she was the 1L representative of the Association of Latin American Law Students, the Association of Black Law Students, and the Student Bar Association. She also was the Co-President of ALALS and a member of the Social Equity Committee during her 2L year. She worked in the Tax Law Clinic and as a research assistant. She also was a summer legal analyst at Goldman Sachs, a judicial intern for the Hon. Esther Salas, an honors legal intern at the Securities and Exchange Commission, and this summer is an associate at Paul Hastings LLP. In the fall, she has been selected as one of two Rutgers Law students who will participate in an international business and comparative law program in Germany. 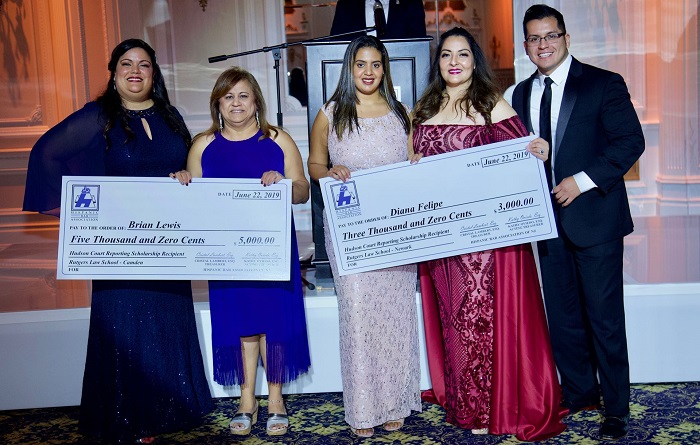 Brian Lewis also received a Hudson Court Reporting Scholarship. He attends Rutgers Law School in Camden. He graduated from Columbia University with a bachelor's degree in chemistry. Afer college, he worked as a senior paralegal in Washington D.C. and in Baltimore. He will be a 3L this fall. Lewis has served as the President of the Rutgers Intellectual Property Association, as a university senator, as a regional representative for Alianza, and as the vice-president of the Black Law Students Association. Last summer, he interned at GlaxoSmithKline and participated in the Hispanic Bar Association's IPLI program, and spent part of the summer in Washington D.C. learning about intellectual property law. This summer is s at Google's LSI program and also will work at Haynes and Boone LLF.

Jennifer Monge is the recipient of the Prudential Scholarship. She just completed her first year at Rutgers Law School in Newark. She was born in Queens, New York to two Salvadorean immigrants who fled their warring nation for a better life. Monge's interest in law was sparked through her experience as a corporate litigation paralegal. Later, she became a pro bono coordinator for a legal non-profit for women in need. This fall, she will serve as the Vice President of Academic Affairs for ALALS. After her graduation, she hopes to become an advocate who will better her community. 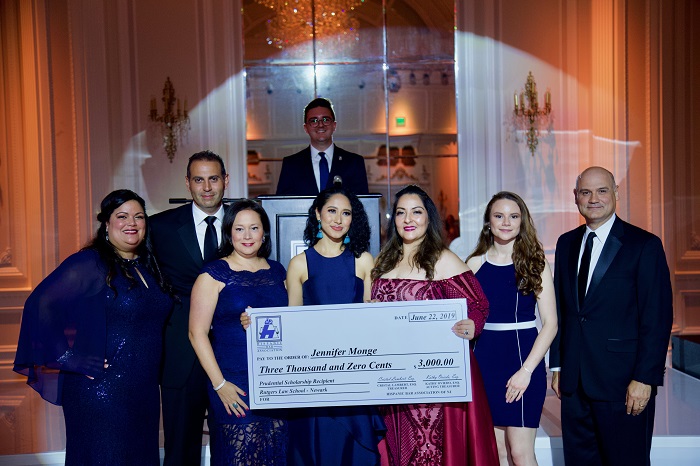 Jennifer Monge receives her ceremonial check at the HBA-NJ Gala.

Maria Nieto received the Beacon Hill Legal Scholarship. She will be in her third year of Rutgers Law School in Newark this fall. She was born in Ecuador and raised in St. Petersburg, Florida. She is a staff editor for the Rutgers Journal of Law & Public Policy and serves as a student attorney in the International Human Rights Clniic. She previously served as the Co-President of ALALS and is currently the Region III president for the Law Student Division of the Hispanic National Bar Association. Prior to law school, she worked as a legislative aide for Florida State Senator Arthenia Joyner. This summer, she is working in the consumer protection and antitrust department of the Attorney General for the District of Columbia. 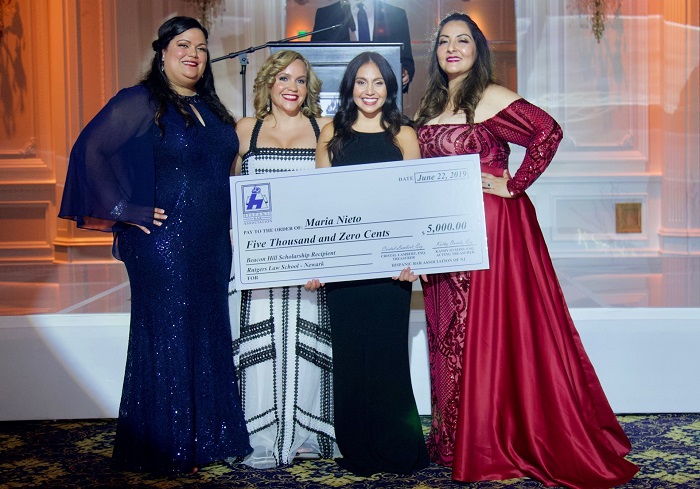 Maria Nieto is flanked by the HBA-NJ officers as she receives her ceremonial check.

Yelky Perez received the Lowenstein Sandler Scholarship. She attends Rutgers Law School in Newark where she is a member of the Minority Student Program, the Association of Latin American Law Students, and the incoming president of the Tax Law Society. She was born in the Dominican Republic and is the first in her family to obtain a college degree. She attended Baruch College, City University of New York, where she earned her bachelor's degree in public affairs and graduated at the top of her class. She worked as a legal assistant for over six years before attending law school. 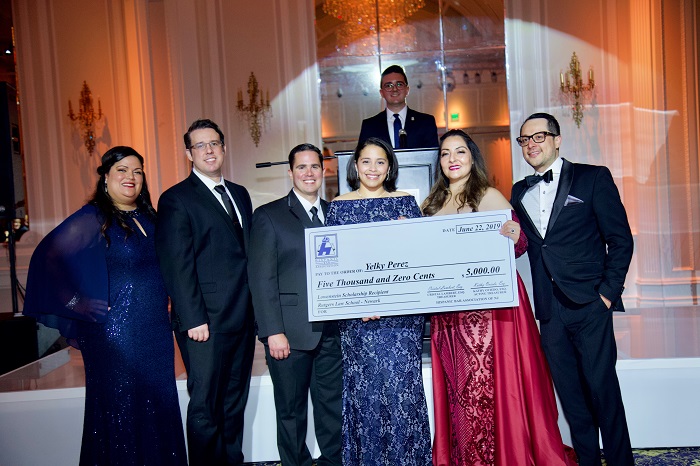 Yelky Perez received her ceremonial check at the HBA-NJ Gala.

Briana N. Ramos was awarded the Parker Ibrahim & Berg LLP Scholarship. She is a native of Camden and will be in her third year at Rutgers Law School in Camden this fall. Ramos earned her bachelor's degree from Rutgers University-Camden in 2017. She is the current President of Alianza and an active member of the Black Law Students Association, Asian-Pacific American Law Students Association and the Women's Law Caucus. She has served as a legal intern for the Children's Justice Clinic and as a Spanish interpreter for the Camden-based legal clinics. She also has worked for Robert J. Casey Jr. & Associates. Ramos is active in iDaretoCare, where she mentors girls in Camden and has been a Big Sister in the Big Brothers/Big Sisters Program. She recently started an online clothing business and aspires to own a real estate investing company and practice corporate and real estate law. 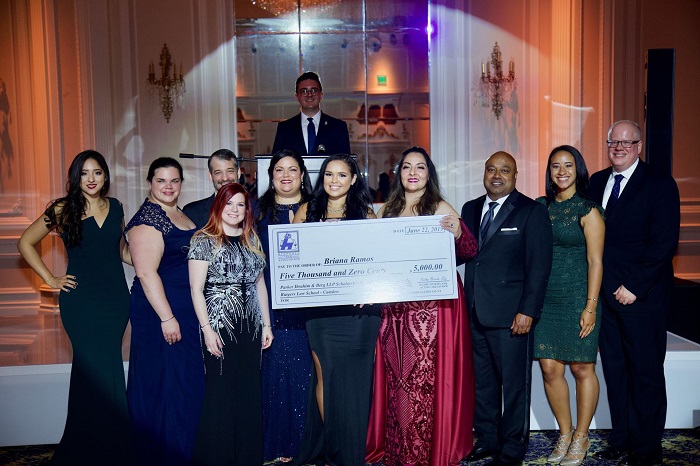 Christian Villatoro received the PNC Bank Scholarship. This fall he will be in his second year of law school at Rutgers Law in Newark. He attended Rutgers University and earned degrees in political science and criminal justice. After graduation, Villatoro worked with La Casa de Don Pedro in Newark. He is the Co-President for the Association for Latin American Law Students for the upcoming school year. After graduation from law school, he hopes to become an Assistant United States Attorney and/or Federal Public Defender. 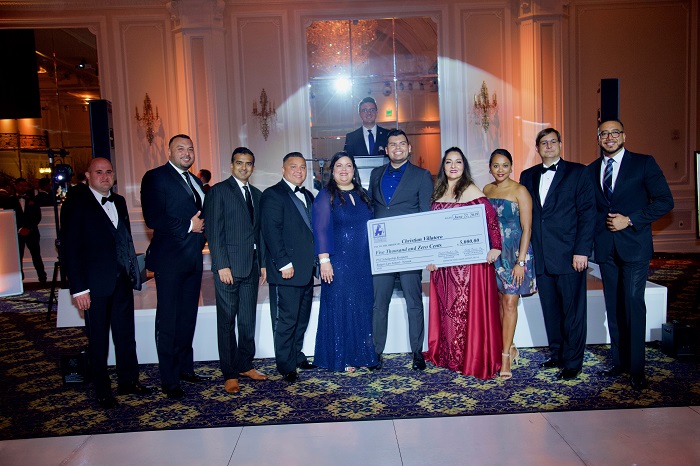 Christian Villatoro stands with members of the HBA-NJ as he receives his ceremonial scholarship check.