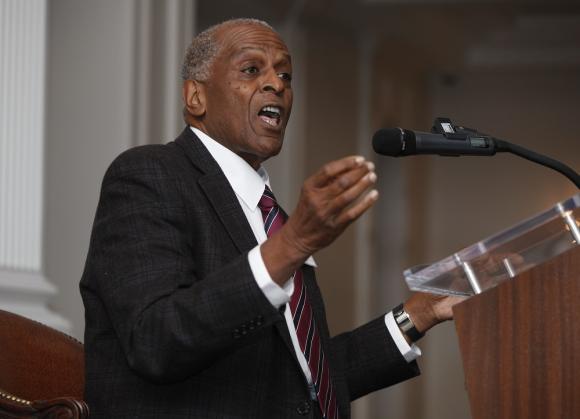 Victor McTeer NLAW '72 announced a $10,000 donation to Rutgers Law at the MSP banquet in April.

Building on the momentum of last year’s 50th anniversary of the Rutgers Law School’s Minority Student Program, students, faculty, alumni, and administrators celebrated the program and its annual banquet and drew inspiration from the life’s work of Victor McTeer ’72, a noted civil rights attorney in Missisippi.

“I am one of you,” McTeer told the audience assembled at Nanina’s in the Park in Belleville. A Baltimore native who attended McDaniel College, McTeer began by helping sugar workers in Puerto Rico and coal miners in West Virginia, before heading to Mississippi in the late 1960s, where he learned of residents losing their jobs because they had registered to vote.

He was advised to go to “the civil rights law school,” and learn from Professor Arthur Kinoy. While at Rutgers, he worked for Morton Stavis on Broad Street in Newark, who mentored him and taught him how to become a trial lawyer. McTeer returned to Mississippi and began representing African American clients in cases no other lawyers would take.

“Winning for good folk has its own reward,” he said.

He talked about representing a female school teacher who had been fired for having a child out of wedlock. McTeer argued the case before the Supreme Court and won. He was only 25 years old. During his career, he became known for working on cases involving housing and employment discrimination, voting rights, and eventually product liability and commercial litigation and has received numerous awards. At the MSP banquet, McTeer announced a gift to the law school of $10,000.

He urged the law students to become lawyers who stand up for what’s right. “The rule of law is now in question and there are people who are willing to destroy it,” he said. “What we did in the 60s and 70s was empower people to advocate for people. . . You have the ability not just to be part of the game, but to run the game. We are the leaders in the new Rutgers electric law school.”

Three students also were recognized at the program: Omar Rana ’19, who won the MSP Public Service Award; Joshua Lattimore ’19, who received the Academic Achievement Award; and Amanda Williams ’19, who was chosen by her peers to be the student speaker.

“MSP has provided me with a safe haven to explore a diversity of thoughts and ideas,” said Williams. “It’s allowed me to be a better, truer version of myself.”