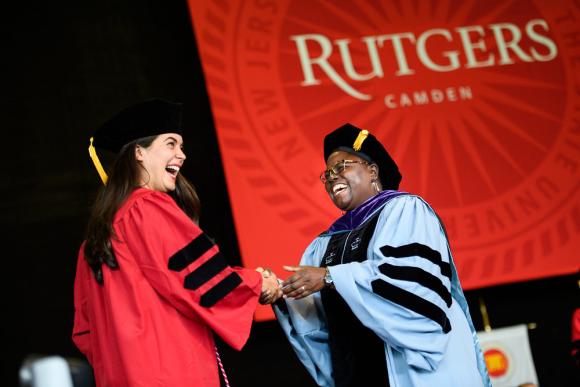 Rutgers Law School graduates were encouraged to safeguard basic human rights and commit themselves to justice, during commencement ceremonies held in Camden and Newark. A total of 325 students graduated.

Rutgers Law has had a history of being on “the front lines of social change” and its lawyers are needed “now more than ever” said Vanita Gupta, the President and Chief Executive Officer of The Leadership Conference on Civil and Human Rights, who gave the keynote speech for Newark at the New Jersey Performing Arts Center.

“A commitment to justice is the only prerequisite for building an America that works for us all,” Gupta told the graduates. “If you work with purpose, hold onto hope, persist through discomfort, and lead with kindness, I know you will better this profession and our country.
Professor Elise Boddie, the faculty speaker in Newark, reminded students to follow their passions, but to have the courage to always do what is right. 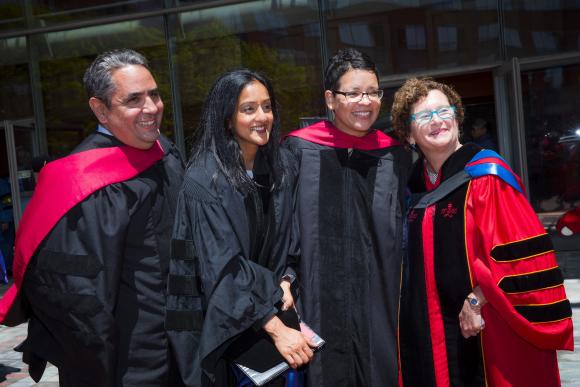 Boddie recalled traveling to Nigeria the summer after her first year of law school, to work on prisoners’ rights. She said she had to leave the country after a political crisis occurred and her organization was targeted. She said that experience led her to work for civil and human rights, “I came to appreciate in ways that I had not before–the importance of freedom of speech and freedom of assembly, freedom from arbitrary state power; and the importance of civil rights.”

She urged students to “have the courage to find your passion and the courage to pursue it. . . and that you have the humility to learn from and draw wisdom from all those around you.”

Student speaker Joshua Lattimore RLAW’19 praised the diversity of his law school class and told the students “it is in our DNA to engage the community in which we live” and told them “our common challenge will be to pursue justice in whatever we do.”
He said, “Many of us will work directly on behalf of the most vulnerable and take back power for those people. Some will work privately in firms or corporations. When you get your seat at the table, save a seat for those who will come after you. Others will walk the halls of power in honorable government or public office. You will have the privilege to shape the law, and you must choose justice.”

Neal Katyal, the former Acting U.S. Solicitor General – who surpassed Thurgood Marshall as the minority attorney who has argued the most U.S. Supreme Court cases in the history of the United States – and Kenneth C. Frazier, chief executive officer and board chair of Merck & Co., received honorary Doctor of Laws degrees at the Rutgers Law School ceremony in Camden, which was held at the BB & T Pavilion.

Frazier talked with the graduates about his childhood and what inspired him to fight for a better world. He said, after his mother died, his father raised him and his siblings on his own in North Philadelphia, working full-time as a janitor to make ends meet. It was in those early, formative years, he said, when he witnessed many injustices and was inspired by people such as Thurgood Marshall to use the “law’s potential to create a better and more just world.”

“It was the spirit of this crusade that inspired me to go to law school, and it is the same spirit that gives me the impetus to speak with you today,” said Frazier, who further noted that his law degree wasn’t just a path to success, but his “ticket to adventure.”

“I can scarcely imagine what kind of adventure is in store for each of you,” he said, “because it is not only the places you will go, but the people you will meet that will shape – and perhaps transform – your lives.”

Katyal told the Rutgers Law School graduates that, although they will be diverse in their respective careers, they will share the ability to safeguard basic human rights and – in doing so – “defend the idea of America.”

He stressed that this principle – “a bedrock of our Constitution” – is today “under attack.” Kaytal defended the notion of representing the unpopular, underscoring the importance of not vilifying attorneys who defend our enemies. “We defend them and we celebrate their service,” he said. “That is the ethos of our profession.”

Katyal further offered several pieces of time-honored advice to the graduates: be yourself, be passionate, let go of envy, and remember the importance of family. “For almost all of you,”

He said, “your sitting here is the product of your hard work, but also hard work by your mothers, fathers, brothers, sisters, uncles, friends, teachers, and others.”