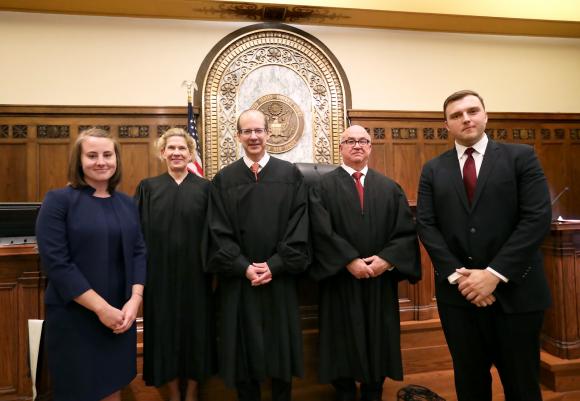 It’s a long journey from the start of the Hunter Appellate Advocacy program in the fall to the final argument in federal court in the spring—but along the way, law students said they learn how to write, think on their feet, and argue a case before an appellate court.

This spring marked the 30th anniversary of the prestigious, year-long program. Law students in Camden divided into teams and argued a moot case involving a passenger who was injured after being instructed to leave an airplane to make room for a copilot. The competition rounds were judged by lawyers from private firms, the U.S. Attorney, public defender, and Attorney General’s offices, and judges from the state and federal bench.

A month after the competition phase of the program began, students Lauren Bateman RLAW’20 and Henry Grabbe RLAW’20 were chosen as the winners of the best oral argument by a panel comprised of the Chief Justice of the New Jersey Supreme Court, Stuart Rabner, and Associate Justices Anne M. Patterson and Faustino J. Fernandez-Vina.

“I learned that I definitely want to be up on my feet litigating,” said Bateman, of the experience.  “I think I will be much more comfortable going to court in the future. Although this was an appellate argument, the skills I learned are transferable and will help with arguing pre-trial motions and the like.”

The Hunter Appellate Advocacy program began 30 years ago when it was created by a group of law clerks to help law students in Camden improve their advocacy skills. The program is in honor of Judge James Hunter III, who served on the Third Circuit of the United States Circuit Court of Appeals. He was a lifelong resident of South Jersey, and a former partner at the Haddonfield firm or Archer, Grenier, Hunter & Read. His former colleagues say he was especially devoted to the development of new attorneys.

“He mentored young lawyers and gave his clerks tremendous responsibility,” said George Leone, a former clerk to Judge Hunter and retired New Jersey appellate court judge, who helped endow the competition. He said Judge Hunter was the only circuit court judge to sit in Camden and the clerks chose to keep the competition in Camden, as a tribute.

Several of Judge Hunter’s former clerks and previous winners of the oral argument competition came back to celebrate its 30th anniversary this spring by watching the final rounds of this year’s arguments. Leone said, “We celebrated by having the clerks come and see the moot court competition and having a large dinner afterward and visiting his (Judge Hunter’s) home there.”

But the oral arguments were the final step in a long process that started the summer before when more than 70 students competed for 32 seats in the Hunter class. Once selected, students spent the fall semester studying advanced legal writing with Professor Gotthelf and eight teaching assistants selected from last year’s program.  In January, the focus of the course shifted and students concentrated on learning how to argue in court and hone their public speaking. Students were coached by teaching assistants, faculty, and alumni of the Hunter program, who came back to the law school to help prepare this year’s competitors.

Of those 32 students, only two students emerged as winners in the month-long moot court competition that culminated in the federal courthouse in Camden.

This year’s best oral argument and best brief winners reflected on their experiences. “I learned a lot about the strategy behind legal advocacy,” said Grabbe. “The simulation was not just about coming up with creative arguments for a client, but required the students to think a few steps ahead to what would really be beneficial for the overall argument.”

“Hunter is a very important program for Rutgers Law School,” said Sheehan RLAW’20. “It’s demanding, intense, and really tests your skills and knowledge. You get months to dig deep into complex legal issues and unpack subtle nuances. You argue in front of real practicing attorneys and judges. You not only learn a lot, but gain confidence once you see how much you’ve learned in the end. There’s no experience quite like it in law school.”

“The spring competition was stressful, exciting, and rewarding all at the same time,” said Ragone RLAW ’20. “Each panel provided my partner and I with meaningful feedback that we strived to implement into future rounds. It was an incredible learning experience that allowed me to become more comfortable and confident when arguing.”