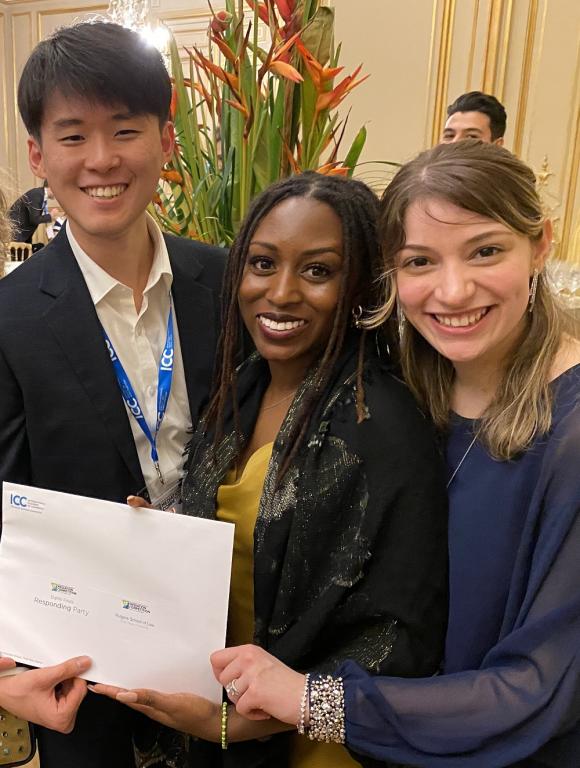 "Our only goals had been to network and to gain insight via judges’ feedback into what we could do to become better lawyers. We accomplished those goals and more."

For an American team in any competition, there is nothing quite like being the tenaciously determined, scrappy-spirited, hard-working underdog. Those of us on Rutgers Law School Newark’s International Alternative Dispute Resolution Team felt as though we had “underdog” stamped on our foreheads from the moment we checked in at contest headquarters in Paris, France.

After all, Rutgers Law School had only once made it to the finals of the International Chamber of Commerce’s highly prestigious Annual Commercial Mediation Competition, all the way back in 2009. Our small International ADR team of three- Myself, Alexis Miller, and Yohan Nah- had never expected to make it further than preliminaries. The 66 other teams from universities in 39 countries around the world had been impressive. Each round challenged us to grow in session, to push our negotiation talents to the limit, incorporating skills we had learned in classes and feedback from the judges of previous rounds into our technique as we battled our way forward. We had endured five grueling rounds of preliminary competition.

And we were well pleased with our performance. None of us had dared imagine we would move forward, really. Our only goals had been to network and to gain insight via judges’ feedback into what we could do to become better lawyers. We accomplished those goals and more, goals we did not even think about as we discussed them in the Uber from the airport. Having the opportunity to see what law students looked like in other countries was invaluable. To sit across the table from our future peers and competitors and be able to compare ourselves in order to gauge how valuable we would be in the international law market place provided fantastic insight into what skills of our own we should be honing and improving upon, such as an inclination to compromise without sacrificing.

Even more than that, it was a validating experience. Many of the teams participating in the contest, like the Brazilian and Indian teams, were there only after winning regional and national tournaments for the honor of competing in Paris. Every time our Rutgers triumvirate went up against such teams, each positive bit of feedback for us hit so much sweeter. The judges (professional mediators and negotiation lawyers from more than a dozen nations) complimented that we were particularly good at coming up with creative solutions; at reading the room and adjusting accordingly; at being generous with our willingness to cooperate; at carefully considering cultural differences. We were patiently collaborative. We supported our partners masterfully. We had well-developed arguments and top-notch organization.

Our coach, Professor Goski, provided us with an excellent chance to practice self-determination as we prepared for the competition. We met with our partners independently in the months leading up to the big event in order to plan for our strategies in the preliminary moot rounds. We researched and wrote our own mediation plans. We watched videos of opening statements and discussed which techniques to mimic. Then, when the bad news came less than a fortnight before we left that our team had gone from 6 members to just three, we doubled down, recalibrated, and invented solutions with just the three of us. In essence, most of the coaching we received came from ourselves, from each other, and that bolstered our pride in performance.

And then the night of the finalist announcements came; the MC shouted “Rutgers Law School!” into her microphone; the three of us, shell-shocked, stumbled onto the stage to accept our secret facts and smile for the photographers. In the end, the RUN-Law IADR Team would finish our time in the competition at the eight finals, helping to cement our school’s reputation as “force to be reckoned with” on the world stage. Score one for New Jersey. Score one for Rutgers Law. Score one for a scrappy little trio of underdogs.

Sam Milano-Sumalinog is a very busy second year law student at Rutgers School of Law in Newark. When she’s not busy being Parliamentarian of SBA, President of the International Law Society, Co-Chair of the Women’s Law Forum, Associate Editor for the International Law and Human Rights journal, and intern at the Child Advocacy Clinic, she can usually be found raising awareness for water rights in her community and volunteering to mentor local teens. Previously, Sam taught English as a Second Language and worked for the Community Health Law Project, as well as interned with the Legal Aid Society and the NYC Mayor’s Office for International Affairs at the United Nations. In her spare time, she writes YA fiction novels and tweets in all caps about injustice.