Board of Governors Distinguished Professor of Law and Nicholas deB. Katzenbach Scholar of Law and Philosophy 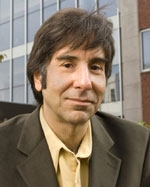 Gary Francione is a published author and frequent guest on radio and television shows for his theory of animal rights, criticism of animal welfare law and the property status of nonhuman animals. He has degrees in philosophy and clerked for U.S. Justice Sandra Day O’Connor.

Professor Francione received his B.A. in philosophy from the University of Rochester and his M.A. in philosophy and his J.D. from the University of Virginia. He studied philosophy in Great Britain as a Phi Beta Kappa Scholar. He was articles editor of the Virginia Law Review. After graduation, he clerked for the late Judge Albert Tate, Jr., U.S. Court of Appeals for the Fifth Circuit, and for Justice Sandra Day O’Connor of the U.S. Supreme Court. He practiced law in New York City before joining the faculty at the University of Pennsylvania Law School in 1984, where he was tenured in 1987. He joined the Rutgers faculty in 1989.

Professor Francione has been teaching animal rights theory and the law for more than 25 years. He has lectured on the topic throughout the United States, Canada, and Europe, and has been a guest on numerous radio and television shows. He is well known throughout the animal protection movement for his criticism of animal welfare law and the property status of nonhuman animals, and for his theory of animal rights.

Professor Francione is the editor of a series, Critical Perspectives on Animals: Theory, Culture, Science and Law, published by Columbia University Press. He has also written in the areas of copyright, patent law, and law and science.

As part of his publicly engaged scholarship, he has published, with Adjunct Professor Anna E. Charlton, a series of books designed to educate the public on animal ethics and veganism: Advocate for Animals! (2017) Animal Rights: The Abolitionist Approach (2015) and Eat Like You Care: An Examination of the Morality of Eating Animals (2013). Eat Like You Care has been translated into 12 languages.

Professor Francione and Adjunct Professor Anna Charlton, started and operated the Rutgers Animal Rights Law Clinic from 1990-2000, making Rutgers the first university in the U.S. to have animal rights law as part of the regular academic curriculum and to award students academic credit, not only for classroom work, but also for work on actual cases involving animal issues.