Board of Governors Professor of Law and Judge Waugh Distinguished Scholar 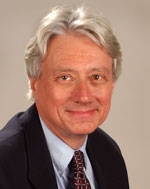 Professor Thomas has published to date four scholarly books and more than 60 articles on various aspects of criminal law and criminal procedure. Double Jeopardy: The History, the Law was published by NYU Press and The Miranda Debate, co-authored with Richard A. Leo, was published by Northeastern University Press. Some placements for his articles include the law reviews of Michigan, Virginia, Texas, UCLA, NYU, California, Illinois, Ohio State, USC, and Northwestern.

His casebook, Criminal Procedure: Cases, Principles and Policies, published by West Group and co-authored by Joshua Dressler, is now in its Fifth Edition and is widely used.

His third scholarly book, The Supreme Court on Trial: How the American Justice System Sacrifices Innocent Defendants, University of Michigan Press, presents a history of Western cultures sorting the guilty from the innocent, as well as an examination of the criminal procedure of France and a series of recommendations for decreasing the likelihood of wrongful convictions in the American justice systems.

His latest book, Confessions of Guilt, on the history and future of the law of confessions, co-authored with Richard A. Leo, was published by Oxford University Press in 2012. It is a history of the law of interrogation that also attempts to forecast where the law goes from here. Noted historian Lawrence Friedman said of the book: “This is a comprehensive and deeply researched book, which examines with insight and passion a particularly dark and murky corner of the world of legal doctrine.”