Distinguished Professor of Law and Judge Frederick B. Lacey Scholar 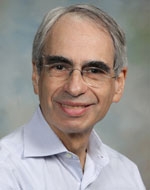 John Leubsdorf is a former Fulbright scholar who has written several books and numerous articles about legal ethics, civil procedure, the legal profession, and law and literature. He was Associate Reporter for the Restatement of the Law Governing Lawyers and has taught at several  top law schools. He helped desegregate the Boston schools as a partner at a large Boston law firm.

Professor Leubsdorf earned his B.A. in 1963 from Harvard, his M.A. in English in 1964 from Stanford, and his J.D. in 1967 from Harvard before clerking for a federal appellate judge. Professor Leubsdorf was a member of the faculty at the Boston University School of Law prior to joining the Rutgers faculty in 1985 and has been visiting professor at Columbia, University of California at Berkeley, Cornell, Cardozo, New York University, and Harvard Law Schools, and a Fulbright Scholar in Paris. He has written a book on French legal ethics and articles on such topics as civil procedure, the legal profession, evidence, remedies, and law and literature. He was associate reporter for the Restatement of the Law Governing Lawyers.