Professor of Law Emeritus Board of Governors Distinguished Service Professor 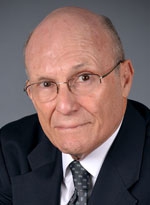 Paul Tractenberg taught at Rutgers Law from 1970-2016 and became a nationally-known expert in public education He is a prolific writer, sought-after speaker, advisor, and a leading legal advocate. He established the Education Law Center, a public interest law project, the Institute on Education Law and Policy, an interdisciplinary research project at Rutgers, and the Center for Diversity and Equality of Education.

Professor Tractenberg earned his B.A. with honors from Wesleyan and his J.D. from the University of Michigan, where he was associate editor of the Law Review. He joined the faculty in 1970, after being associated with two major New York City law firms, the Peace Corps, and the Governor’s Committee to Study New York Human Rights Laws. He is the author of numerous books, articles, and papers on education law and related subjects; a frequent lecturer; and consultant and adviser to many national, regional, and state organizations and agencies. In 1973, Professor Tractenberg established the Education Law Center, a public interest law project, and served as its director for three years. He is involved in a number of landmark constitutional cases about public education, especially Abbott v. Burke, which New Jersey judges and lawyers voted overwhelmingly the most important state court decision of the 20th century. (A 12/20/09 Record op-ed noted Abbott’s role in the State’s recent educational successes.)

In September 2000, Professor Tractenberg established the Institute on Education Law and Policy (IELP), an interdisciplinary research project at Rutgers University–Newark, and he directed or co-directed it, until his retirement from Rutgers Law on January 1, 2016. Since his retirement, he has established a new non-profit organization, the Center on Diversity and Equality in Education, as the home for his continuing education law and policy projects. The main one at the moment is a major study of the Morris School District in New Jersey, the only district in New Jersey and the U.S. to be consolidated for racial balance purposes.

During the 1980s and 1990s, Professor Tractenberg built upon long-standing interests in the lawyering process and in dispute resolution by teaching a variety of courses and seminars, by serving as faculty adviser to the law school’s regional and national championship negotiations and client counseling teams, and by writing and consulting in the field. He is the author of a lawyer’s deskbook on alternate and complementary dispute resolution.

In 2008-9, Professor Tractenberg taught a special year-long Centennial Seminar about the law school, and he and his students authored a book titled A Centennial History of Rutgers Law School in Newark: Opening a Thousand Doors. It was published by the History Press in 2010. Professor Tractenberg’s second book inspired by the Centennial was published by Rutgers University Press in 2013. It is titled Courting Justice: Ten New Jersey Cases That Shook the Nation. Most of the chapter authors and most of the featured cases have a substantial Rutgers Law School connection.

In his spare time, Professor Tractenberg dotes on his four young grandchildren and is an avid long–distance bicyclist.