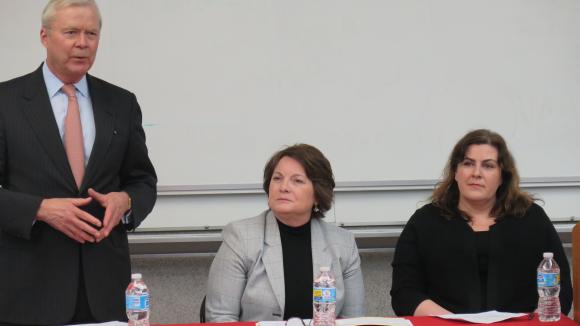 Ending mass incarceration for juveniles was the theme of a recent panel at Rutgers Law School in Newark, which brought together juvenile justice experts from nonprofits, private law firms and professors who specialize in juvenile justice reform.

The panel, sponsored by Professor Laura Cohen and the Criminal and Youth Justice Clinic, was in honor of In re Gault, the Supreme Court decision, which guaranteed due process for juvenile defendants.

As part of the panel, the experts traced the history of the treatment of juvenile defendants in New Jersey, celebrating recent reforms, and additional changes they’d like to see.

In 2008, Cohen’s clinic began visiting juveniles who were incarcerated and found the conditions of solitary confinement and of the detention cells deplorable. She helped form the coalition of attorneys and advocates who compiled data and research presented to show the conditions of juveniles living behind bars.

Coalition members have worked for years for juvenile justice reform, and said they were successful in getting some reforms enacted when state bill S2003, sponsored by state Sen. Nellie Pou, was signed into law in 2015. Prior to that, juveniles who were incarcerated could be put into solitary confinement for months at a time as punishment and children as young as 14 could be sentenced as adults.

“We really believe in juvenile justice reform,” said Mary Coogan, of Advocates for Children of New Jersey, a coalition member. “Together we’re stronger.”

Natalie Kraner, an attorney with Lowenstein Sandler, said her firm donates 20 hours a week in pro bono work year-round to work on cases that include juvenile justice.  The philosophy behind juvenile detention is that it is to be rehabilitative, not punitive, explained Professor Douglas Eakeley, of Rutgers Law School, who moderated the panel. However, panelists said, that is not always the case.

“There’s no reason to keep kids in prison for years and years, it’s not working,” said  Kraner.

Among the list of reforms still needed is parole reform, said Rebecca Livengood from the ACLU-NJ, who said even after being released, juveniles are kept on parole for a year after release. Alex Shalom,  senior staff attorney with ACLU-NJ, added that there is still concern over the number of juveniles remanded to adult court, the long sentences they face, and the conditions they experience when they are sent to adult prison.

Panelists also noted that the juvenile detention facilities in New Jersey are in rural areas, far away from the urban cities where many of those who are incarcerated lived with their families. That makes it difficult for family members to visit and ultimately, increases the isolation of the youth who are incarcerated.

The attorneys agreed there is still a long way to go to better the treatment of juvenile offenders. Cohen pointed out that any meaningful reforms also need to address the a systematic bias that exists, because of the disproportionate amount of children of color who are incarcerated. She said  75 percent of the incarcerated youth in New Jersey are African-American and an additional 15-16 percent are Latino,  “It is a system that is fundamentally unfair,” she said.

Andrea McChristian, of the New Jersey Institute for Social Justice, cited statistics that show an African-American child is 24 times more likely to get locked up for the same behavior done by a non-minority child.

Cohen also pointed out the high cost of incarceration and said it costs $196,000 a year to keep a juvenile in jail and that once released, that child generally has an 85 percent recidivism rate.

Paula Getty of the Office of the Public Defender, pointed out that juvenile defendants are encouraged to accept plea agreements under the threat of being remanded to adult court.

“We want a seismic shift in the way juveniles are treated,” Cohen summed up. “We wanted them treated fairly, protected from abuse and we want them to have a chance to leave juvenile incarceration whole.”

Professor Sandra Simkins of the Rutgers Law School Children’s Justice, a former public defender in Philadelphia, said the focus for juveniles behind bars needs to be on rehabilitation, not punishment.