After Years of Work by Rutgers Clinic, A Bronx Man's Murder Conviction is Vacated 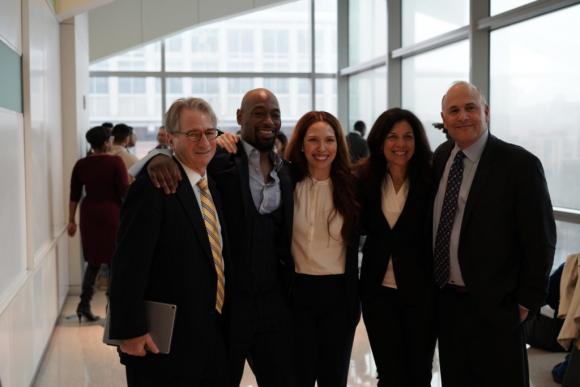 Huwe Burton, second from left, with his legal team, including Professor Laura Cohen, second from right, after the indictment against him was vacated. Photo Courtesy of the Innocence Project.

For a decade, students and attorneys in Rutgers Law’s Criminal and Youth Justice Clinic worked to exonerate Huwe Burton, a New York man with no prior criminal record who was wrongfully convicted of killing his mother in 1989, when he was just 16 years old.

Their hard work finally paid off in an emotional hearing on January 24, when Bronx Supreme Court Justice Steven Barrett vacated Burton’s conviction and dismissed the case. Barrett based his decision on newly discovered evidence that showed Burton had falsely confessed to the crime.

Burton’s exoneration was the result of a collaboration between Professor Laura Cohen, director of the clinic, and her students; Professor Steven Drizin, director of the Center on Wrongful Convictions at the Northwestern Pritzker School of Law; Barry Scheck and Susan Friedman of the Innocence Project; and the Conviction Integrity Unit of the Bronx District Attorney’s Office.

During the hearing, Burton thanked the lawyers and law students who had championed his cause. “I could not have made it here by myself,” he told the judge and courtroom onlookers.

Former Rutgers Law students, including Suzanne Hoyes ‘12 and Adrienne V. Hawkins ‘12, came to the hearing and recalled working on the case while in law school.

“To this day I feel like the work I did on Huwe’s case and in the clinic was my most meaningful experience at Rutgers Law,” said Hoyes, who is a chief compliance officer for an investment management firm in Chicago. “The justice due to Huwe came after decades and decades of doggedly fighting and I was grateful to be a small part of that fight.”

The Rutgers clinic got involved in 2009 when Drizin reached out to Cohen and asked her to join Burton’s legal team. At the time, Cohen and Drizin were working together on another juvenile false confession case, which resulted in the 2014 exoneration of David McCallum and Willie Stuckey in Brooklyn. Burton, who had just been released on parole after serving 20 years, was determined to clear his name.

For the next six years, Cohen, Drizin, and their students intensively investigated the case, uncovering evidence pointing to an alternate suspect and learning that the three detectives who had interrogated Burton had obtained false confessions from two other men.

Despite this evidence, it was not until Darcel Clark was elected Bronx District Attorney in 2016, that a pathway for Burton’s exoneration emerged. Clark established the Conviction Integrity Unit shortly after her election and Drizin and Cohen were introduced to her by Innocence Project co-founder Barry Scheck.

“Working on the case seemed an uphill battle,” recalled Hawkins. “Huwe’s gracious spirit and positive outlook on life despite all that happened to him was inspiring.”

Cohen spoke at the hearing and said of Burton, “I and every student who has worked on this case over the years. . .have been inspired and moved by his seemingly limitless patience and his steadfast determination to achieve justice, not only for himself but for his parents.”

Both Hoyes and Hawkins said working in the Rutgers clinic in 2011-12 had a tremendous impact on them. “I took everything I learned in the clinic and applied it to my job as a prosecutor in the Bronx District Attorney’s office,” said Hawkins. “Compassion, humility, and above all, a zealous search for the truth.”

Before being exonerated, Burton spoke to Rutgers Law students in Newark in 2017. He recalled being interrogated for hours by the police without an adult present and said he was promised leniency if he confessed. He said prison is especially hard on teenagers and young adults: “They may have hard exteriors but you don’t know how vulnerable they are on the inside. They’re scared.” He had this advice for aspiring lawyers, “If you’re fighting for people, let them know. You will be surprised how far you will take someone in spirit.”