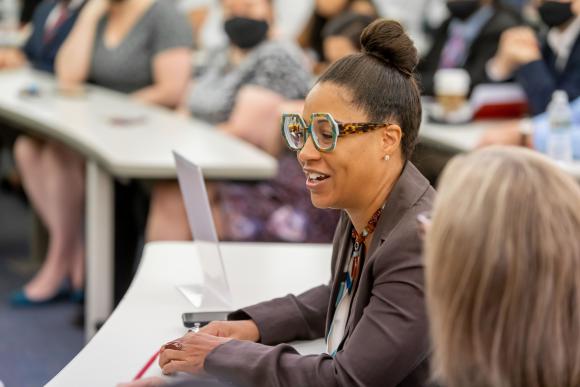 Article reprinted in part from WalletHub

Labor Day in the 21st century is all about beaches, BBQs, ballgames and buying things. Although celebrations were limited during the past two years due to the COVID-19 pandemic, Americans can observe the holiday unrestricted this year thanks to the success of vaccines. For example, 53% of Americans plan to get out of town for Labor Day weekend. More than 150 million will enjoy a cookout. And thousands will pack college football stadiums.

Labor Day hasn’t always been this relaxing, though. The holiday’s roots can be traced back to the streets of 1880s New York City, where rival union leaders joined forces to protest the unfair labor practices that plagued industry at the time.

To gain a better understanding of the biggest issues facing workers today and how they’re likely to evolve in the near future, we posed the following questions to a panel of labor experts including Stacy Hawkins, Rutgers Vice Dean and Professor of Law.

What are the biggest threats facing working people today?

With Republican legislators proposing new legislation to roll back workplace protections like minimum wage (i.e., the Workplace Flexibility and Choice Act proposed in the House) and tenure for public teachers (like that proposed in South Carolina, Florida, Iowa, Missouri, and Wisconsin), American workers face the possibility that they will have fewer workplace protections in the future than they have today. This is even though the US already ranks near the bottom of OECD countries in terms of worker protections. Just as we saw the Supreme Court take what was perhaps the first of many steps to roll back fundamental rights, in reversing Roe v. Wade and restricting access to abortion, we could see a similar trend of regressive employment legislation.

How is the “Gig Economy” changing the nature of work? Should “Gig Economy” workers be treated like traditional employees or do we need new labor regulations for this growing sector?

One of the things that became clear during the “Great Resignation” is that workers value the flexibility (to work where and/or when they want) that had been afforded to them during the pandemic. Flexibility has also been one of the most important features of the Gig Economy. That is no coincidence. It would be a mistake for our employment law and policy to assume job flexibility is incompatible with status as a traditional employee. It may be that some gig workers are appropriately classified as independent contractors (those who work across a multitude of platforms and truly direct their own work). It is equally true that other gig workers are almost certainly employees (those who work exclusively for one platform/company per set expectations). What should not (cannot) be the defining distinction between the two is simply the amount of flexibility a job affords to workers. We have to broadly embrace the kind of flexibility workers want without excluding the vast majority of them from the array of legal protections that attend status as a traditional employee.

What policies should governments and firms adopt to improve the quality of life of American workers?

Workers have spoken with their feet during the “Great Resignation.” They want greater flexibility and living wages. One of the ways the government can help smooth the transition to this new status quo is to regulate minimum standards. That way we avoid having big winners and big losers in the labor market. Some states and localities have already started enacting Fair Workweek laws that guarantee workers the kind of work hours they need to manage their lives and by raising the minimum wage to ensure all workers will earn a living wage.

How likely is it that Congress will pass new supports for workers, including an increase in the Federal minimum wage or mandatory paid family medical leave?

Even if Congress increased the federal minimum wage (and they absolutely should), it would not likely be set at a level that would account for regional variation in living standards. So, the state-by-state approach that has been underway for about a decade is likely to continue, where states and localities set minimum wages based on living standards in the region. Places like Arizona, California, Illinois, New Jersey, and D.C. are already on track to have a $15.00 minimum wage. Whereas places like Alabama, Georgia, Kansas, Kentucky, and North Dakota have minimum wages at or below the federal minimum wage and are not likely to get to $15.00 anytime soon.

I would love to see a federal paid family medical leave law; I am not optimistic. Again, this is another area where we are seeing movement at the state and local level (about a dozen states at present have paid family leave laws and a handful more have paid sick leave laws), but a federal minimum would be welcome if it were politically feasible.

What tips do you have for people that are planning a getaway for the Labor Day weekend?

Stay safe – COVID is still with us, monkeypox is surging, and heat waves are blasting in many parts of the US. Take the necessary precautions as you enjoy the end-of-summer celebrations!