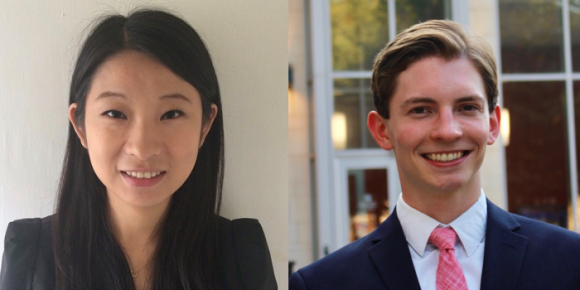 Zhao Li, left, and Gerald Tyrrell, right, took the top prize at this year's Hunter Appellate Advocacy Competition, conducted both in the federal courthouse and virtually in front of actual judges.

The students in Hunter Appellate Advocacy know that anything can happen during oral argument, but cats on the bench, barking dogs, and arguing in UGGS were a few unexpected surprises this year when Covid-19 forced Hunter out of the federal courthouse and onto Webex.

Undaunted, 16 students and almost as many state and federal court judges used technology to see the competition through to the final arguments on April 7, where Zhao Li RLAW '22 and Gerard Tyrrell RLAW '21 took the top prize.

Hunter Appellate Advocacy is a five-credit, year-long program based in Camden in which students compete for one of 32 seats based on their prior legal writing grades and an oral argument tryout. It is taught by Barbara Gotthelf, a Professor of Practice and Director of Judicial Externship.  Working in pairs, Hunter students draft an appellate brief in the fall and practice oral argument in the spring before participating in a month-long competition judged by practicing attorneys and members of the state and federal judiciary.

This year, the first two argument rounds were held in the federal courthouse before the law school began distance learning. All of the subsequent  rounds were done virtually, allowing students to discover, among other things, that Judge Theodore McKee of the Third Circuit has a fierce-looking German Shepherd; U.S. Magistrate Judge Elizabeth Hey has an affectionate cat, and arguing a case in leggings in front of a computer screen is a lot harder than it looks.

“I thought that doing arguments over Webex would reduce the jitters that you feel when you are in the courtroom, but man was I wrong,” said Caitlin Cardene RLAW '22, who wore leggings and UGGS (and a suit jacket) to argue in the final round with her partner, Tom Dydek RLAW '22.  “The judges were, quite literally, right in front of your face,” she said.  “I found myself more acutely aware of my body language, how frequently I looked at my outline, how my hair looked, etc.”

Li also found the experience unsettling.  “During the first minute of my opening,” she said, “I was thinking to myself, where should I look, to make, or seem to make, eye contact with the judges? It was just weird to stare at the camera all the time.” Her concerns vanished when the panel – made up of Judge McKee, Judge Jack Sabatino (presiding judge in the NJ Appellate Division), and U.S. Bankruptcy Judge Andrew Altenburg – began firing questions at her. “A hot bench saved me,” she said. “I started to pay attention to the judge who was asking questions.”

All of the final-round judges, as well as the quarter-final and semi-final judges, gamely accepted the challenge of judging via Webex, and many even participated in multiple pre-argument sessions to test their computers, cameras, and microphones. And while all of the students were able to complete their arguments, there were occasional technical glitches.

“Arguing into my computer screen where the only window not buffering was my own was exceptionally difficult,” said Dydek, adding that his cat got “particularly riled up” during the arguments and, like Judge Hey’s cat, liked to jump on the desk to join in. Dydek and his partner, Caitlin Cardene, won the award for Best Brief for Plaintiff/Appellant. Yaffa Stone RLAW '21 and Adam Meisle RLAW '20 won Best Brief for the Defendant/Respondent.
Tyrrell saw the upside to arguing remotely.

“Seeing the judges adapting to Webex with us was a lot less intimidating than seeing them behind the bench,” he said, noting that “arguing online had a surprisingly disarming effect.” The fact that both the students and the judges were adapting to WebEx made it “easier to let my guard down a little and relax.” This was especially true in the semi-final round, Tyrrell said, “when Judge [George] Leone had to remove his dog from the room after it wouldn’t stop barking.”

Cardene also found a silver lining to arguing in the time of Covid.  “I felt that we were all exposed to everyone’s humanity and understanding, include the judges’,” she said.  “All in all, I feel that this pandemic has given a lot of people perspective on what is truly important in life. To go through this experience with individuals all trying to navigate immense personal difficulties as well as professional difficulties is what allowed me to keep going.”