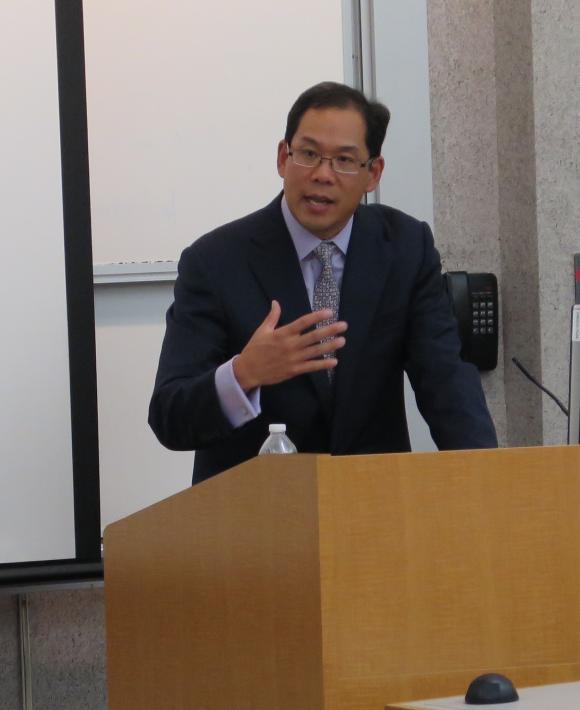 Douglas K. Chia, Executive Director of The Conference Board Governance Center, was the keynote speaker at the Sept. 14 opening session.

The changing role and composition of corporate boards of directors was the subject of a talk given by Douglas K. Chia, Executive Director of The Conference Board Governance Center.

Chia was the keynote speaker for the Opening Session of the Rutgers Law School Center for Corporate Law and Governance on September 14.

Co-deans Ronald K. Chen of Newark and Michael T. Cahill of Camden attended the talk. The center’s directors, Douglas Eakeley and Arthur Laby, said they were celebrating a year since the launch of the center, which offers, among other things, experiential learning opportunities for students and engages alumni in a steering committee for the center.

“When you ask people what exactly a board member is supposed to be doing in this job, you get a whole range of responses,” Chia said.

Some think of a traditional model where directors act as an advisory group or a sounding board for the CEO, but often defer to management. Others see a more involved role where a director might be involved in detailed decisions, including deciding the number of breadsticks that should be on a table.

“There is an incredible range of views and expectations about the job of people who are not company employees and who meet as a group about six to eight times a year,” Chia said.

He also said that while the role of a director may not always be defined, boards are blamed when things go wrong, from security breaches to compliance problems, “When you listen to these people, it’s as if the directors are supposed to be cops on the beat being tasked with preventing anything bad from happening.”

Chia said it is important for the thought leaders in companies to clearly define the role of their directors and come to a common understanding, perhaps defining the role in a job description. He said a company that is thriving may have different needs for its board of directors than one that is in a turnaround situation or is a start-up company.

“You’re never going to get everyone to agree, but it would help if we had a set of principles that structure how we think about this in practice and analyze different situations,” Chia said. It’s not just the company governance officers who need this, but also the directors, who need to know what is expected of them.

Chia challenged companies to consider getting their board members together to discuss their roles and responsibilities for the company and see what comes out of the discussion.

He invited law students and alumni in the audience to continue to think about these points and how they influence corporate governance.