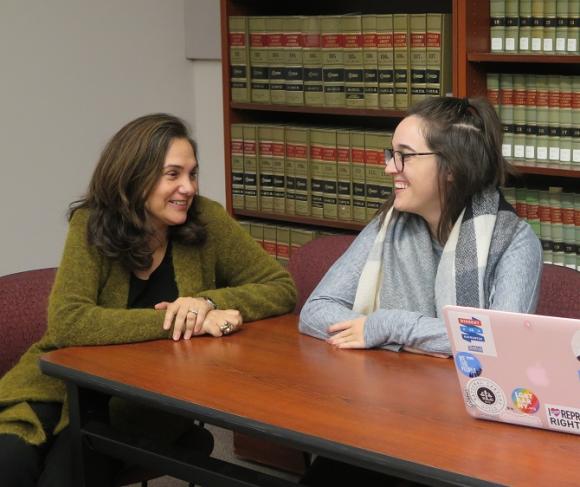 During the first week of Covid-19 lockdown in 2020, Distinguished Clinical Professor Penny Venetis and her students began a new project-devising a model diversion program to ensure that human trafficking survivors and victims are not arrested, and are diverted to wraparound services, delivered exclusively by Rutgers University.

Those services include: medical, dental, legal, skills training, etc.  After publishing a white paper of their conclusions, Venetis and her students assembled a team of faculty and staff members from eight different departments/schools throughout the university to actualize the model program. Rutgers has given this university-wide project a grant to bring the project into fruition.  It will be the first of its kind in the nation, where all supportive services are delivered by a single institution, where services are individually tailored to each client’s specific needs, and where there is no pre-determined time-table for a client’s completion of the various therapeutic programs.

Additionally, the clinic students worked on, and won, seven lawsuits during the spring and fall of 2020 to ensure that all eligible voters received paper ballots, rather than risk their health by voting in person as the pandemic raged.

Last but not least, the clinic is gearing up towards presenting a matter to the Inter-American Commission on Human Rights to end disenfranchisement of U.S. citizens. Most states have laws that permit either the temporary or permanent disenfranchisement of citizens from voting who have been convicted of felonies. The Supreme Court put its stamp of approval on these laws decades ago, even though these laws have a disparate impact on Black voters and voters of color and work to dilute the political voices of those communities.

The International Human Rights Clinic is arguing that these laws violate international law, and treaties to which the US is bound. Those treaties, interpreted by human rights courts and bodies, make clear that the right to vote cannot be taken away if someone commits a crime, unless that crime is related to treason, or voter fraud. That is not the case with the millions of people throughout the US whose right to vote was suspended when they were convicted of crimes. The clinic filed its petition before the Inter-American Commission 16 years ago. The matter is finally being heard in 2021.