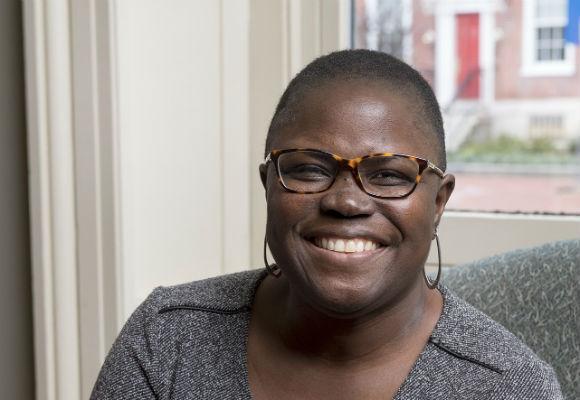 Kimberly Mutcherson, co-dean of Rutgers Law School in Camden, has received the Association of American Law Schools (AALS) Inaugural Impact Award with four other law school deans for the creation of the Law Deans Antiracist Clearinghouse Project (LDACP). Launched in June, the project is a webpage for law deans, faculty, and the public that contains resources and information related to addressing racism in law and legal education.

“I am honored to join my fellow deans in receiving this new award, and I applaud the AALS for recognizing the gravity and significance of this moment in our nation’s history,” says Mutcherson. “We are part of the largest group of Black women to be law deans at one time, and we felt that this is a moment where our positions allow us to create and curate an ongoing conversation through the Law Deans Antiracist Clearinghouse Project.”

Mutcherson notes that “traditionally, law schools have been slow to change, but we can and should play a leading role in combating racism in this country. At Rutgers Law, we have established a series of committees to work on the questions posed by the LDACP so that we can create a roadmap for who we want to be as an institution responsible for preparing individuals who will interpret and implement the law on behalf of our society.

“It’s a process of engaging our law school community in some really tough conversations about ways in which we have contributed to creating an environment where our Black, Latinx, and first-generation students might feel that the way that we teach doesn’t reflect their experiences,” continues the Rutgers Law co-dean. “There’s a conservative streak in law schools – not politically, but we’ve been doing things the same way for a very long time. We need to understand that, regardless of the topic, there is an element of race in everything that we teach.

A resident of Collingswood, N.J., Mutcherson became the first Black, first woman, and first LGBT individual ever to be named as a law dean at Rutgers in 2019.  She recognizes the impact of role models in her own life and upon the lives of current Rutgers Law students. “When I was in law school, I don’t know that there were any Black female deans, and not many women deans, at law schools in the country,” she says. “Who you become often is a reflection of who you see in those roles. That we have this cohort of Black women as law deans, doing this job, says something about the ambitions that our women students could and should have.”

“The AALS thanks these five law school leaders for creating the Law Deans Antiracist Clearinghouse Project and is pleased to honor their efforts with the inaugural AALS Impact Award,” says Darby Dickerson, AALS president and dean of UIC John Marshall Law School. “These remarkable women conceptualized and created this phased guide to help law schools develop a sustainable antiracist agenda and provide resources and steps for each phase of the process. Given the project’s impact, they are the perfect inaugural recipients.”
“The five extraordinary deans who are receiving this award acted decisively in a moment that required a meaningful response from all of us in legal education,” says Vince Rougeau, AALS president-elect and dean of Boston College Law School. “In assembling these resources, they have provided their colleagues with a wonderful set of materials to support our work in building an antiracist future for our law schools, our profession, and our society.”

In 1997, Mutcherson earned her juris doctor from Columbia Law School, where she was a Harlan Fiske Stone Scholar and received the Samuel I. Rosenman Prize for her commitment to public interest law. She also earned the Kirkland & Ellis public interest fellowship and co-founded the Women of Color Coalition. She received her bachelor’s degree in history from the University of Pennsylvania in 1994.