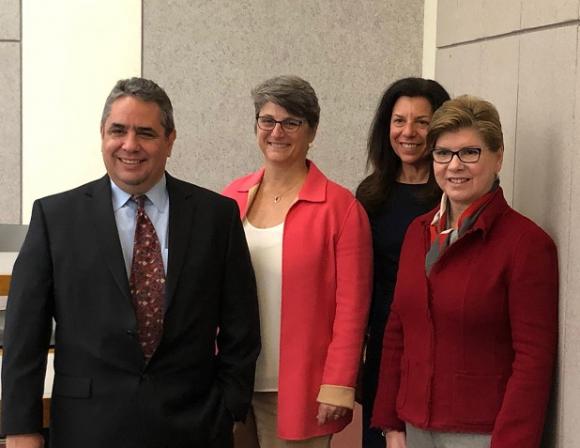 Fresh on the heels of a change in New Jersey law that eliminates fines for youth offenders, requires legal representation for arrested youth, and limits the time youths can be incarcerated, experts in juvenile justice, including youth advocates, came together at a one-day conference at Rutgers Law School to look for ways to make additional reforms to the juvenile justice system.

The “Disrupted Youth: Juvenile Court and School Exclusion” was a joint venture by Rutgers Law School, the Rutgers Center on Youth Justice and Human Development, the Northeast Juvenile Defender Center, and the Rutgers Institute for Professional Education.

N.J. State Sen. Nellie Pou (D-Passaic) who sponsored legislation that eliminated solitary confinement for punishment to incarcerated youths, as well as the recent legislation, was presented with an award by conference organizer Laura Cohen, a Rutgers Law Professor who co-founded the center on Youth Justice and Human Development.

“We’ve made a lot of progress with criminal justice reform that’s been made to make the system more fair in the last number of years,” Pou said. “We understand in the legislature how desperately this system needs to be reformed.”

She talked about the harm to a child’s mental health solitary confinement imposed and how the future must include a way to stop the disproportionately high number of arrests of children of color. “It is so alarming to hear that a black child is 21 times more likely to be incarcerated than his or her white counterparts,” she said. “We also have the fourth highest Latino to white (incarceration) disparity in the nation .  .  . New Jersey’s statistics are much too high; our job is not really done.”

Keynote speaker Rachael Rollins, the district attorney who oversees the City of Boston and Suffolk County, MA, talked about personally visiting youth in jail, advocating for limiting the time they spend behind bars, and getting those in power to have difficult conversations about youth incarceration. “Knowing children are different, how do we reshape that system with the ultimate goal of re-integration,” she asked.

Rollins said imposing adult criminal liability on teenagers, whose brains and behavior have not yet fully developed, is a system that is “outdated and ineffective.” She added that advocates need to promote things that keep youth out of the system – including having positive activities, a positive peer group, and family support. She called on those in the room to be a voice for change, “Go out and speak to as many people as you can, so they can start to understand the urgency we feel.”

Other speakers included Ana M. Bermúdez, the Commissioner of the NYC Dept. of Probation, who spoke out against putting children in adult prison, saying that it increased their rate of recidivism. Guest panelists also addressed the psychological damage children experience from being incarcerated and the disruption to their education.

Guests also heard from two former youth offenders who shared their experiences about being incarcerated. Rutgers Psychology Professor Paul Boxer, co-director of the Center on Youth Justice and Human Development, discussed evidence-based practices for preventing and reducing youth offending. He encouraged guests to promote the adoption of these practices across educational and juvenile justice systems to reduce juvenile arrests.

Rutgers Law School Co-Dean David Lopez, who gave the opening remarks, said, “Rutgers Law School has a long tradition of community service.” He said that the law school and the new Center on Youth Justice and Human Development will continue to work for “a more fair and just system for our youth.”