Fighting for the Rights of People Who Need Assistance 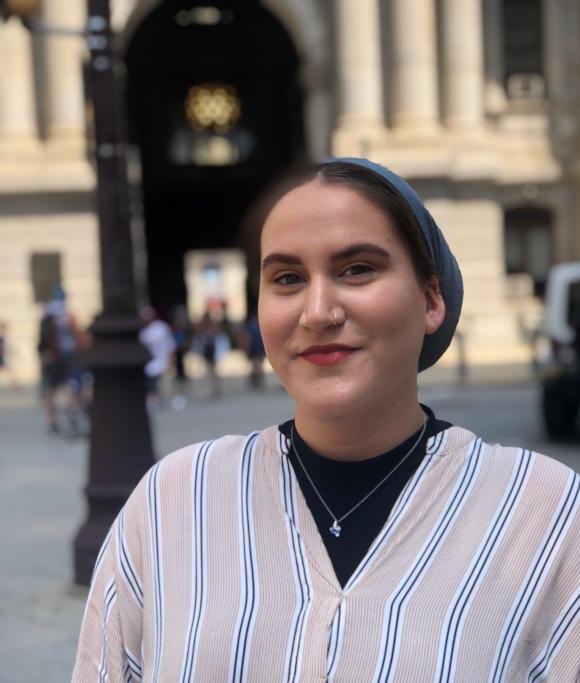 For as long as Natima Neily can remember, she has supported the rights of the marginalized and people who face discrimination.

Even before she started elementary school, she joined her parents in fighting for the rights of people with disabilities.

Born and raised in Santa Cruz, Calif., Neily was just a toddler when her parents brought her along to protests calling on their city to comply with the Americans with Disabilities Act and provide wheelchair access to places such as buildings and parks.

“The first five years of my life, the most formative years of my life, both of my parents were active in the implementation of ADA,” says Neily, a first-year student at Rutgers Law School in Camden. “I have memories of being in City Hall as they were petitioning for accessible parks, elevators, and things like that.”

Neily’s mother is paraplegic as a result of contracting polio when she was an infant in Mexico. Her father is diabetic, and partially blind, so Neily has a heightened awareness of whether buildings are accessible for everyone. “It makes you hyper-aware whether there is a ramp or not,” says Neily, “and whether the door frame is wide enough, and if the electronic door buttons work.”

After her mother and older brother emigrated from Mexico in the 1980s, they settled in California, where her mother met her father, who is white. Growing up in a mixed-race family, Neily says her mother and brother faced discrimination because of their dark skin and heavily accented English. Neily says she was well aware that her light skin and blonde hair gave her privileges not afforded to her mother, brother, or younger sister, who also has a darker complexion. When grocery shopping, Neily’s mother would send her to the butcher counter because it was more effective for a blond, blue-eyed kid to get the attention of a clerk than a dark brown-skinned woman in a wheelchair.

“I was a seemingly able-bodied, white-passing individual during the majority of my life, which made it very obvious to me that a lot of systems just aren’t fair,” says Neily. “What inspired me to go into law is my passion for justice and passion about institutional reform, and this desire to move myself and my family forward and upward.”

After graduating from Arizona State University in 2016 and before arriving in Camden in August, Neily worked as a legal assistant at the Florence Immigrant and Refugee Rights Project in Phoenix, Ariz., helping to provide free legal services to children detained by the Office of Refugee Resettlement or released in the state. The children were mostly from Guatemala, Honduras, and El Salvador. Some arrived in the United States without their parents. Others came to the United States with their parents, but were separated from their families when, earlier this year, authorities began housing adults in detention centers separately from their children.

At the detention shelters, Neily conducted interviews with the children to learn about their situations and then shared the clients’ information with the organization’s staff attorneys, who would decide how to proceed with a case.

“What I was able to express to an attorney may have made the difference between that attorney accepting or denying that case,” says Neily. “There were times when I’ve talked attorneys into taking cases that otherwise, on the bare biographical information on the forms, might have been denied.”

Hearing the stories of the plight of her clients could be heartbreaking, but Neily says it was gratifying to be able to assist the children.

“Just knowing that I was part of the process of getting that child representation, of helping that child get relief and remain here in the U.S., and to know that I essentially changed these kids’ lives is rewarding.”

Neily says she’s open to learning about all areas of law at Rutgers Law School, but she’s passionate about immigration rights and international rights.

“I know that I will always be involved in those issues in some way,” says Neily, “whether it is pro bono work or it is a nonprofit or with a legal aid organization.”

Helping people in the communities in which she was raised is a responsibility that Neily says goes much deeper than a desire to give back.

“It’s remembering where I came from,” she says.