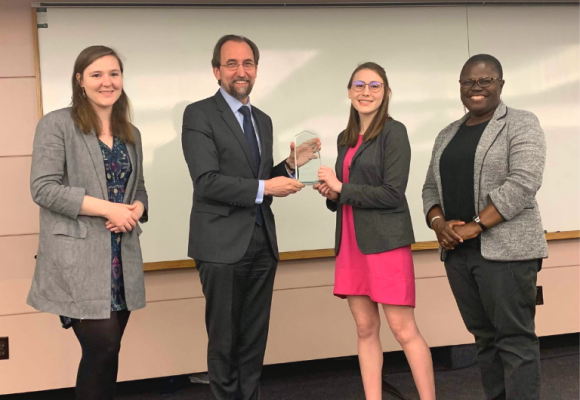 Named in honor of the late U.S. Supreme Court justice, the Brennan Award is presented by Rutgers Law School to a foreign lawyer or judge who has made a notable contribution toward establishing or defending human rights and the rule of law. Brennan presented the first award in his name at Rutgers University–Camden in 1986. Previous awardees have included the first woman lawyer in Korea, a distinguished Indonesian human rights lawyer, and the first woman judge in Botswana, who also has been a tireless advocate of adequate treatment for those afflicted by HIV/AIDS.

In his remarks upon receiving the award, Ra'ad Al Hussein discussed the history of international politics and cautioned against nationalization, noting that the human rights violations of today are the conflicts of tomorrow.

He shared that he has faith in the grassroots activist efforts and growing intersectional awareness among human rights movements around the world, "We cannot depend now on much of the leadership at the highest levels. We have to depend on ourselves and we have to have the courage to speak out and say what needs to be said."

Between 2014 and 2018, Ra’ad Al Hussein served as the United Nations High Commissioner for Human Rights. The sixth incumbent of the office, Ra’ad Al Hussein is known as the most outspoken to hold the role for his efforts to promote and protect what the United Nations Charter of 1945 calls “human rights and fundamental freedoms for all without distinction as to race, sex, language, or religion.”

"It takes an amazing person to call it as he sees it...and he is eminently worthy of the award," said Alaina Billingham, a second-year law student and President of the Rutgers International Law Society.

Reflecting on his 1972 publication calling for the creation of the role of United Nations High Commissioner for Human Rights, Professor Roger Clark said he always envisioned someone in the role who has mana—a Maori word—meaning, "someone who has gravitas, stature, eloquence, and above all guts to take the facts and run with them. You heard from that person today."

Earlier, in his capacity as Deputy Permanent Representative of Jordan to the United Nations and then Jordan’s Permanent Representative, Ra’ad Al Hussein was deeply involved in the negotiations to create the International Criminal Court. He has been a firm supporter of this addition to the architecture of international law, a body which is designed to protect human rights and also, in the stirring words of the preamble to the United Nations Charter, “to save succeeding generations from the scourge of war which twice in our lifetime has brought untold sorrow to mankind.”

A former Jordanian peacekeeper and a strong critic of discrimination against and the sexual exploitation of women, he was appointed by the United Nations Secretary-General in 2004 to write the first comprehensive report on eliminating sexual exploitation and abuse committed by United Nations peacekeepers. As he explained in the report, “A peacekeeping operation cannot legitimately advise the government on adherence to international human rights standards and legal and judicial reform if its own peacekeeping personnel are engaging in acts of sexual exploitation and abuse, including such crimes as rape.”

This semester, Ra’ad Al Hussein is the Perry World House Distinguished Global Leader-in-Residence at the University of Pennsylvania.