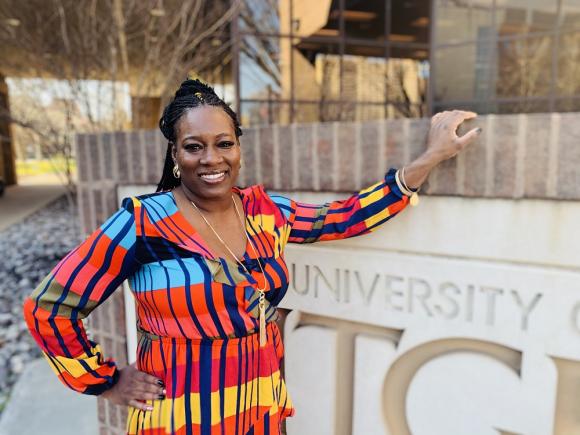 After graduation in May, Scales will spend two years working on juvenile and racial justice at Georgetown Law School.

When Ayisha Scales came to Rutgers Law School in 2017, she knew she wanted to work in the field of juvenile justice, especially helping young people of color who became entangled in the criminal justice system.

She said she was inspired by the 10 years she spent as a social worker in New York City at Neighborhood Defender Services of Harlem and other child welfare agencies. Her clients were either African American or Hispanic and she observed the intersections of race, poverty, inequality and the law.

Three years later, her dream has come true. When she graduates from Rutgers Law in Camden in May, she will move to Washington D.C. to take part in a two-year Racial Justice and Juvenile Defense Fellowship at Georgetown Law School.

Scales said during her fellowship, she will train and educate criminal defense attorneys on racial justice advocacy for juveniles, along with public defenders. In addition, she will work to bridge the gap between local youth and police officers, organizing forums and symposiums to bring them together.“I came to law school for this very thing,” she said.

The other skill she’ll bring to her fellowship is the knowledge she gained from being a teen mother and her own challenges with the child welfare and juvenile system growing up in New York City. She said, “My passion for juvenile rights and young people comes from my own experiences, it imperative for young people to have strong network of adults rooting for them and giving them a foundation so they can thrive and be productive in society.”

Scales said she’s seen young people incarcerated repeatedly, instead of getting rehabilitated, “You have to look at alternative ways of teaching young people new skills. Incarcerating youth hasn’t worked for decades and here we are decades later, and we still have not found the right formula. We have a moral obligation to ensure our youth are successful.”

While at Rutgers Law, she took part in the Juvenile Justice Clinic under the direction of Professor Sandra Simkins and worked as a judicial extern with Camden County juvenile court. She’s in an externship program with the public defender’s office, gaining additional experience in her chosen legal field.

She credits the professors and deans at Rutgers Law for their encouragement and support, and for providing an environment where law students can talk about difficult subjects, including race and the law. “Any dream I had they have been incredibly supportive,” she said. “Rutgers law school provided a great opportunity for me to excel as student and begin a promising legal career.”

Outside of law school, Scales is a mentor for aspiring black lawyers. She serves as the Regional Vice Chairwoman for Black Law Students Association, and has helped organize various conference on behalf of the law school and community at large, including a regional minority job fair, black law student convention, and a pre-law diversity symposium. She has been recognized for her community service with several awards.

Scales said she also was inspired by the successful women lawyers she met at law school, including  Simkins, Professor Katie Eyer, Co-Dean Kim Mutcherson, and Assistant MSP Dean Rhasheda Douglas. She said the Camden Law School environment made it possible for her to express her fears of being treated differently as an African-American woman lawyer, “They have created a space where you’re able to have those fears and talk candidly. It gives me hope. As women, we can push forward.”