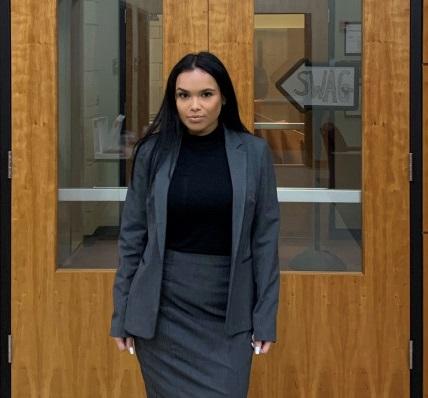 While at law school, Briana Ramos RLAW '20 took part in both the Children's Justice Clinic and the Entrepreneurship Clinic.

Briana Ramos always knew that she wanted a career that would allow her to help others succeed.

“Less than two percent of attorneys in the United States are Latina,” Ramos says. “I want to not only be part of that number, but do my part to help increase it.”

When the Camden resident receives her Juris Doctor degree from Rutgers Law School in Camden this spring, she will take her next steps toward achieving what she calls “a proverbial seat at the table” after overcoming challenge after challenge, including a battle against COVID-19.

During her studies at Rutgers Law, she supported herself and her family by working various part-time jobs including positions as a bartender and makeup artist, and later started her own online women’s apparel store. She moved home for a time to help the family while continuing to excel in her role as a full-time student.

Throughout it all, Ramos built a professional network and established connections that have helped her to recognize “how vast this discipline is and how much I can do with my law degree,” says the Camden native who found a world-class law school experience by staying in her hometown.

After spending three years at Rutgers–New Brunswick, Ramos completed her undergraduate degree at Rutgers‒Camden in 2017. Her Facebook post announcing that she was planning to take the Law School Admission Test (LSAT) elicited a response from Rob Ransom RLAW’16, a Rutgers Law alum who offered tips on preparing for the exam and invited her to a Hispanic Bar Association of New Jersey event, where he introduced her to members of the organization.

“Not only was I in a room full of attorneys, but a room full of Hispanic attorneys,” explains Ramos. “They were so welcoming. At the time, I was still only preparing for the LSAT, yet now I was a part of the community and they welcomed me with open arms.”

At the event, she met Carmen Garcia RLAW’85, formerly Trenton Municipal Court’s chief judge, who became Ramos’ mentor. Ramos followed Garcia’s example at Rutgers Law and became the president of Alianza, the Latino law student association founded by Garcia when she was a Rutgers Law student in the 1980s.

As a rising third-year student in the summer of 2019, Ramos served as a Minority Student Program Teaching Fellow, teaching contract law to students enrolled in the Summer Jump Start Program for incoming first-year students, which allows students to take one course in the summer before their first semester. Teaching the course helped boost her self-confidence. To prepare for class, she had to review notes from when she took the class nearly two years earlier, and be prepared to answer any questions from the students.

One of Ramos’ most rewarding experiences at Rutgers Law School in Camden was participating in the Children’s Justice Clinic, where she had the opportunity to learn to interview and represent juvenile clients in criminal matter

“It was most rewarding having a client say that no one had ever cared about her case more than we had,” says Ramos. “Not only was I learning, I was doing something impactful in the lives of real clients as well.”

During her final semester, Ramos continued to seek ways to both make an impact on real lives while still focusing on her interest in corporate law.

In the Rutgers Law Entrepreneurship Clinic, she helped various start-up companies with their corporate transactional matters. “The real-world experience I gained from the Entrepreneurship Clinic was invaluable,” says Ramos. “It has prepared me to enter into this prestigious discipline ready to effectively represent and serve clients.”

When Rutgers transitioned to remote learning due to the coronavirus pandemic in the middle of her final semester this spring, Ramos faced one of her biggest challenges when she and her two roommates contracted COVID-19.

For the 14 days that Ramos was quarantined, the Rutgers Law community supported her wholeheartedly. Classmates offered to drop off groceries to her home. Louis Thompson, the dean of students, checked in on her every day. Faculty gave her extra time to turn in assignments and made allowances when she could not participate as much as she usually does in class. “It reminded me that Rutgers is truly like a family environment,” says Ramos.

Reflecting on her time at Rutgers Law, Ramos says all of her experiences have made her stronger.

“The challenges I have overcome give me motivation to handle what’s yet to come,” she explains. “If I can go through law school and go through the challenges that I went through, I am confident in my ability to not only do well in my career, but to excel.”

This summer, Ramos will be working as a summer associate at Lento Law Group and will begin a judicial clerkship in the Camden County Superior Court this fall.