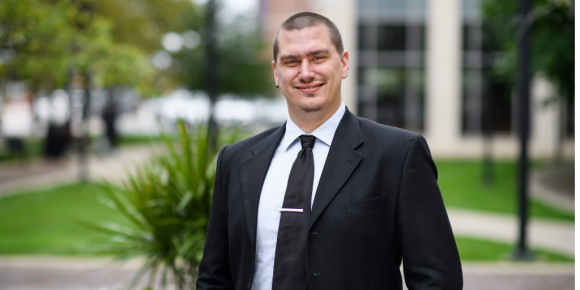 “I wanted to promote policy while also working with community."

Long before Derek Demeri went to Rutgers Law School, he was already an activist.  He was first inspired to stand up for others in high school when he became active with this high school’s Gay-Straight Alliance.

During his undergraduate years at Rutgers New Brunswick, he had a summer internship at the International Gay and Lesbian Human Rights Commission, now called Outright. With that organization, he attended a meeting at the United Nations that was studying how the law in different countries can help stop the spread of HIV. “It really opened my eyes to issues beyond my own personal issues,” he said. “I understood what it really meant to stand in solidarity with someone else.”

Demeri was inspired by his work there and wrote a paper about how New Jersey could prevent the spread of HIV, including decriminalizing sex work. The paper was published in a human rights journal, a rare honor for an undergraduate. He reached out to non-profits and other advocates to create an alliance to help sex workers in New Jersey.

In 2013, he formed an organization called the New Jersey Red Umbrella Alliance that advocates for sex worker rights. Demeri and his colleagues applied for grants  and did personal outreach to workers. Because of his efforts, his organization was able to have policy discussions and advocate for federal funding for HIV programs.

Once he graduated from Rutgers, Demeri moved to Atlantic City and continued his work with the NJ Red Umbrella Alliance. He handed out condoms to sex workers, linked them with service providers, and talked to them about his group’s policy work. After 18 months, Demeri went to work for a labor union and realized in order to make the difference he wanted to as an advocate, he needed a law degree.

“I wanted to promote policy while also working with community,” he said.

In 2017, he enrolled at Rutgers Law School in Camden and took part in the Minority Student Program and the Social Justice Scholars Program. During his 2L year, Demeri was the president of the law school’s LGBTQ organization, Outlaws.

But those were just the tip of Demeri’s pursuits as an advocate and future lawyer. He also participated in the Equal Justice Works Advisory Committee, became the Managing Editor of the Law Review, and was an Eagleton Institute of Politics Class of 2020 Fellow.

He interned at the ACLU during his 1L summer, working at the LGBT & HIV Project in New York City, and during his 2L year, interned at the public defender’s office in Los Angeles County. Demeri also was an extern with U.S. District Court Judge Michael Shipp and spent his 3L semester at the New Jersey Department of Labor, working for the Commissioner.

After he graduates in May, he will clerk for New Jersey Appellate Judge Arnold L. Natali. “I would love to work for Community Legal Services in Philadelphia,” he said, to continue advocating through the agency, which is committed to public policy and direct service.

He reflected on his years at Rutgers Law, “I’m very happy with my time here. You can’t beat the price, or the good quality education.”