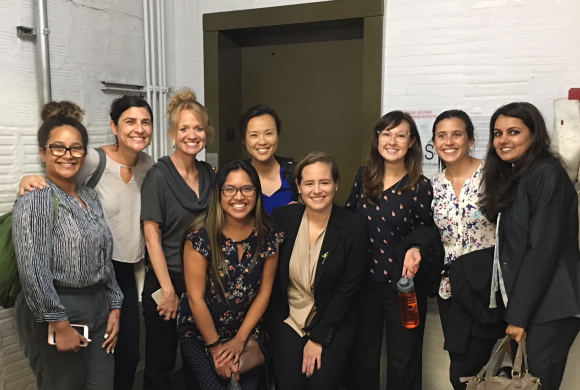 As part of its ongoing commitment to serving immigrant children, the Immigrant Rights Clinic (IRC) has provided services to separated and reunited families and to unaccompanied children. In August 2018, Professor Anju Gupta, IRC Director, and Samantha Rumsey, IRC Staff Attorney, participated in site visits to detention centers in New York where separated and unaccompanied immigrant children were being held. They and a group of lawyers, interpreters, doctors, and mental health workers, in conjunction with the Center for Human Rights and Constitutional Law, interviewed children, toured the facilities, and questioned facility staff to ensure that the government was complying with standards for detaining children set forth in what is called the Flores settlement. Under the terms of this 1997 agreement, immigration officials are required to release children to the care of their parents or other adult relatives without unreasonable delay, among other things.

“Even with my background working with immigrant children,” said Rumsey, “it was really jarring and worrying to meet with young children who had spent months in custody and who had no idea when they would be released to their families.” The facilities Gupta and Rumsey toured held children of all ages, ranging from infants to 17-year-olds. “It is horrifying to read or watch a news report discussing the separation of a toddler or kindergartner from his mom or dad, but it is infinitely more heartbreaking to see room after room of four-, five-, and six-year-olds, and know that if not for the whims of our government, many of these children would be living with their parents instead of strangers.” Gupta recalled, “I expected that seeing small children, who would remind me of my own small children, would be difficult for me, and it was, but what surprised me was that my most difficult interview was with a 17-year-old boy who wanted more than anything to be released to his father and had no idea when he would be.”

IRC began its focus on serving immigrant children in 2016 when, owing to a grant from the Chancellor’s office, the clinic was able to hire Rumsey. Rumsey, a former attorney at Kids in Need of Defense, represents children and families seeking asylum, Special Immigrant Juvenile Status, and other forms of immigration relief. She also organizes legal clinics and “Know Your Rights” information sessions for the local immigrant community. Rumsey’s clients include children who entered the United States alone as unaccompanied minors and spent time in government shelters before being released to live with family members and parents and children who entered the United States together and were held in family detention centers.

Since the change in administration in 2017, IRC’s unaccompanied minors project has become even more relevant. In addition to the Flores site visits, Rumsey accompanies recently reunited families to their check-ins with Immigration and Customs Enforcement (ICE). Recently, some reunited families were released from detention and permitted to live in cities throughout the United States while they fight their immigration cases. Upon release, these families were given notices to appear at ICE offices for check-in appointments. Because ICE has the authority to detain immigrants, even those who are complying with the terms of their release, some immigrants benefit from the support of a lawyer at their check-in appointments. In collaboration with the Immigration Justice Campaign and the Lawyers’ Committee for Civil Rights Under Law, IRC answered the call to provide legal support to these recently reunited families at their initial check-in appointments.

“A dad I accompanied to his check-in told me he was very afraid to go to the ICE office for his appointment,” Rumsey recalled. “ICE officers were the people that took his five-year-old son away from him. He feared that if he said or did the wrong thing at the check-in, he might be re-detained or have his child taken away from him again.” In the months after a family is reunited and released from immigration detention, parents face many challenges, including finding a place to live, enrolling their children in school, and attempting to repair the trauma their children suffered during their separation. This same period is also a critical time in a reunited family’s immigration case. If a parent misses an ICE check-in, fails to notify the immigration court of a change of address, or misses a deadline to apply for an immigration benefit, the family’s chances of securing immigration protections could be jeopardized. For that reason, the months after a family is reunited and released from immigration detention, the advice and support they can receive from IRC can be a lifeline.