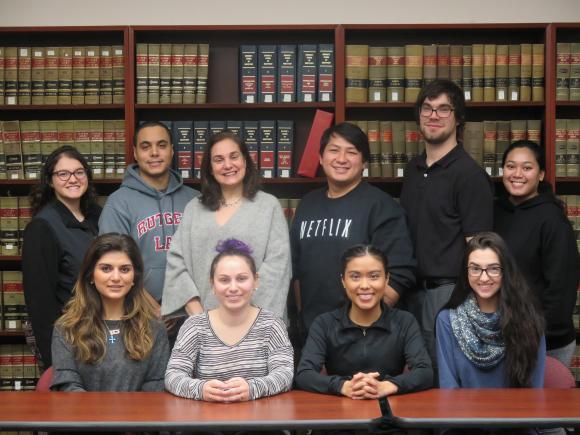 Students in the International Human Rights Clinic worked with Venetis on the brief.

A U.S. District Court Judge in Texas has found that Rutgers Law School’s International Human Rights Clinic, which filed a habeas corpus petition on behalf of detained Mexican asylum seeker, journalist Emilio Gutiérrez-Soto and his son Oscar, has presented sufficient evidence to show that the pair were detained in violation of their First Amendment rights, and will hold a hearing on the matter.

The ruling, made on July 11 by U.S. District Court Judge David Guaderrama in the Western District of Texas, is a victory for free speech and for asylum seekers. Documents obtained through the Freedom of Information Act showed that the journalist was on a “target list” to be arrested even before his political asylum case had been decided.

The petition said Emilio Gutiérrez-Soto was arrested and detained just days after he received a prestigious award from the National Press Club for his courageous work in reporting, in the face of great danger. During his acceptance speech, and at other times before his arrest, he criticized U.S. immigration policy, as it pertains to asylum seekers. ICE unlawfully detained him on December 7, 2017. The Rutgers Clinic has been advocating for his release since March, by filing a habeas corpus petition on his behalf.

Rutgers Law School’s International Human Rights Clinic filed the petition in March, after the Mexican journalist and his son Oscar, who are Mexican asylum seekers, were unconstitutionally detained by ICE officials on December 7, 2017.

“We applaud Judge Guaderrama’s First Amendment analysis and findings.  It violates the Constitution to jail people, including asylum seekers, for expressing political opinions,” said Professor Penny Venetis, the Clinic’s Director. “Although we do not agree with his other findings, he is spot on in finding that asylum seekers have free speech rights that include criticizing U.S. policies.”

Emilio Gutiérrez-Soto fled to the United States in 2008 with his son, seeking political asylum after receiving death threats from members of the Mexican Security Forces after working as a journalist and reporting on military abuse and corruption. During his time in the United States, he complied with all Immigration and Customs Enforcement requirements, he worked lawfully after being issued multiple work permits, and has been present at every ICE check-in.

"Emilio Gutiérrez-Soto is an award-winning journalist who exposed corruption and received death threats for his investigative reporting,” said Venetis, in March. His political asylum case is still pending.  After living in the U.S. for nine years, where he has been an integral part of various communities and an outspoken proponent of immigration law reform, he was inexplicably detained by Immigration Services.”

“His six-month detention violates the constitution and international law.  It's time for him to be released,” said Professor Venetis July 11.

"Eight Rutgers Law students worked tirelessly on these habeas corpus petitions, devising and refining arguments until the very last second,” she said. “By working on this case, they have become true advocates who are ready to represent victims of human rights and civil rights abuses."

The award-winning Rutgers law clinics have been at the forefront of defending civil and human rights for the past 50 years. The International Human Rights Clinic has litigated cutting edge human rights cases, including the landmark Jama v. U.S., case that held that it is a violation of human rights to abuse asylum seekers in U.S. detention.