Judge Victoria Pratt '98 Requires Dignity and Justice in Her Courtroom 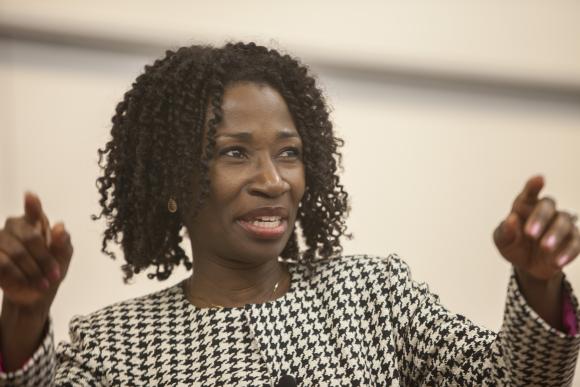 Newark Presiding Municipal Court Judge Victoria Pratt '98 calls her method of treating courtroom defendants "a simple idea." But her policy of procedural justice, which includes treating people appearing in her courtroom with courtesy, respect and giving them a chance to tell their stories - has gotten international attention. Pratt shared her method of procedural justice and her successful outcomes with students, faculty and guests at Rutgers Law School. Pratt was this year's speaker for the 33rd annual Chief Justice Joseph Weintraub Lecture.

Pratt admitted that working in criminal court isn’t seen as a desirable assignment. Judges see it as a punishment, or as something to be endured – an attitude she also had before she got there.

But since she began hearing cases in Newark’s criminal courts, Pratt has implemented a new attitude and policy that has garnered international acclaim. She calls it “Procedural Justice” and she outlined its components and merits at a speech to guests at Rutgers Law in Newark.

Her compassion and attitude towards defendants that come before Newark municipal court on criminal cases, stems from her upbringing as a bilingual child in New York City, who was aware of the language and learning barriers facing her parents and neighbors. “My parents taught me, you treat everyone with respect, no matter how they dressed, looked or spoke,” she said.

Pratt said her goal was to change the tenor of the courtroom, which was often perceived as “foreign, intimidating and often hostile” to defendants. She also changed the way they were treated by the judiciary.

She called her transformative approach “a simple idea” that supposes if defendants in court are treated with dignity and respect during their court experience, it’s more likely they will obey the law. She said she has found if people are treated fairly, the people in court are more likely to be satisfied with judges’ decisions, even when those judges rule against them.

Pratt outlined some of the guidelines she follows in her courtroom:

·         She said she tries to give the person a chance to be heard and tell their side of the story.

·         She often assigns people essays about themselves that they later read aloud in court, which helps them in goal setting.

·         She takes pains to appear neutral and not friendlier to one side in a case, even if an attorney may have appeared before her numerous times.

·         She tries to ensure defendants understand the court procedure and process and sometimes clarifies legal language for them.

·         She takes pains to treat all people who appear before her with respect and common courtesy, offering a greeting to each person, being an active listener and looking each person in the eye during sentencing.

“Respect can be contagious,” she said. Pratt said she also has partnered with the Center for Court Innovation to provide alternative sanctions for low-level offenders that may include community service, individual or group counseling or other options.

“I decided to change the culture of the courtroom by leading by example,” Pratt said. “When the court believes differently it increases public trust and people respond differently.”

She cited court cases involving marginalized people – a man who was a heroin addict, a pan handler with a brain injury, a schizophrenic homeless woman – most of whom needed medical treatment more than punishment, where she tried to find a solution for them. “The reality is we criminalize social ills and ask a judge to do something about it,” she said.

Her remarks drew a standing ovation from the packed crowd that included law school students, professors, alumni, and several Newark leaders. She said, “My dream is that judges will use these tools and revolutionize the communities they serve.”