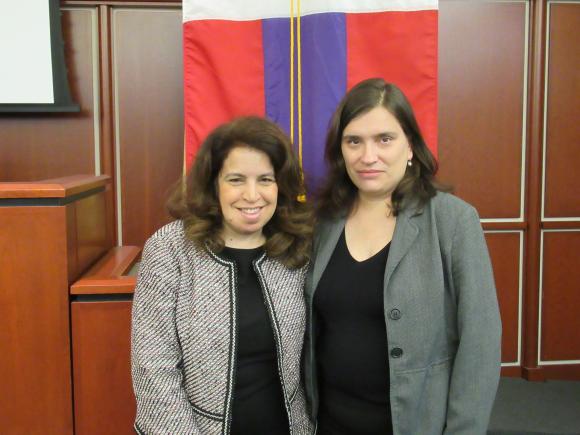 If a child in foster care in New Jersey needs an immigration attorney, in all likelihood, that child will be appointed an attorney from Rutgers Law School.  More than 300 immigrant children in foster care—many of them unaccompanied minors—have received legal services from Rutgers Law School clinics through a pilot project that began in May 2016 and has just been renewed for another two years.

Through a statewide collaboration between Rutgers Law School and the New Jersey Department of Children and Families, the Child Advocacy Clinic (CAC) in Newark, led by Professor Randi Mandelbaum, and the Immigrant Justice Clinic in Camden, led by Professor Joanne Gottesman, have been representing immigrant children who are involved with New Jersey’s foster care system.  The project has grown over the three years to the point where it now has four full-time attorneys: three in Newark: Cosette Douglas, an alumna of the CAC, Ariela Herzog, and Kimberly Krone; and one in Camden, Sondra Furcajg, as well as a full-time paralegal, Alma Godinez, who also is an evening student at the law school.

“In a majority of cases, the children are undocumented and we are helping the children apply for immigration relief such as Special Immigrant Juvenile status, Asylum, or a U Visa,” said Gottesman.  This type of relief, if successful, ultimately will lead to lawful permanent residence (a “green card”). At times, the children also may be in removal (deportation) proceedings and require representation in immigration court. At other times, the attorneys may be assisting with green card renewals and petitions for citizenship and naturalization. Mirroring national trends, many of the clinics’ young clients are from Mexico, El Salvador, Guatemala, and Honduras. However, through the project, Rutgers lawyers have represented children from many other countries, including Haiti, Liberia, Ghana, China, the Dominican Republic, and Jamaica.

Among the clients was a boy who came to the United States from Honduras when he was 14 because he identifies as gay, which was not accepted in his rural community. He was maltreated by his own family members, bullied, and physically assaulted by members of the community. The police and local law enforcement were not helpful. He fled to the United States to live with a sympathetic uncle in New Jersey. However, the uncle maltreated him and he ended up in New Jersey’s foster care system. Because he was able to receive legal assistance for his immigration needs, he was able to apply and be approved for asylum. He now has a work permit and will be eligible to receive a green card.

Mandelbaum emphasized how such representation also helps the child’s foster care case and overall well-being, “Providing representation to stabilize a child’s immigration status helps to achieve permanency and stability in all aspects of the child’s life, because once the child has lawful permanent residence status, they will be able to work, go to school, and may even qualify for certain forms of public assistance, such as health insurance.”

In another case, a 13-year-old girl from El Salvador had been sexually abused by her father both here and in her home country and was placed into foster care because of the abuse. She was eligible for both asylum and Special Immigrant Juvenile status and was granted asylum in early May 2019. This will enable her to obtain lawful permanent residence in one year and the Rutgers’ clinics will assist her with the application.

Gottesman and Mandelbaum, along with Meredith Pindar, their liaison and partner at the Department of Children and Families, have written an article about the project titled: A Pathway to Permanency: Collaborating for the Future of Children who are Immigrants in the Child Welfare System, which was published in the Child Welfare League of America’s national journal. The article highlights the importance of such partnerships between child welfare agencies and local immigration legal services providers.

“We have been so encouraged by the support that the New Jersey Department of Children and Families has provided to immigrant foster children. We hope the project, which to our knowledge is the only statewide program of its kind in the country, can be a model for other states and jurisdictions,” said Mandelbaum.

The professors have been contacted by representatives from Texas and Arizona, inquiring about the logistics of the project. They also both have presented nationally about their work involving foster children and undocumented immigrant children generally.