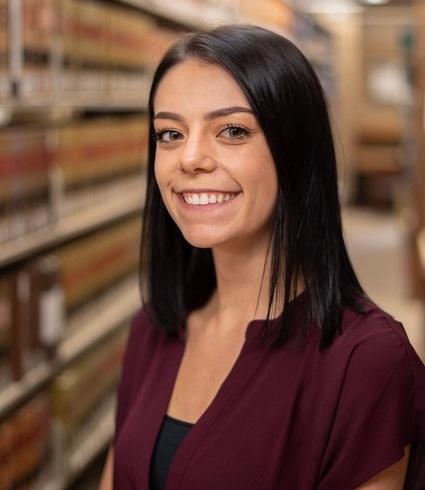 Shelby McCarty RLAW '22 is spending the summer working with a union in Philadelphia thanks to her Peggy Browning Fellowship.

Shelby McCarty, a rising 2L at Rutgers Law School in Camden, has been awarded the prestigious Peggy Browning Fund Fellowship and is working at the Sheet Metal Workers Local Union No. 19 in Philadelphia over the summer.

McCarty was one of 91 students chosen out of 500 applicants. “Peggy Browning Fellows are distinguished students who have not only excelled in law school but who have also demonstrated their commitment to workers’ rights through their previous educational, work, volunteer and personal experiences,” said the Peggy Browning Fund, in a news release.

“As the former 1L representative and now president of the Rutgers Employment and Labor Law Association (RELLA), this fellowship fits right into my interests/future career goals,” said McCarty. “I majored in Human Resource Management in undergrad where I developed a passion for workers' rights and the labor movement. I have worked numerous jobs in the past which really opened my eyes to how little workers know of their rights or how to fight for them.”

McCarty has already started the fellowship and has been conducting research on prevailing wages for the union, including gathering information on jobs in the union’s territory. “I'm currently filing a brief with the Pennsylvania Prevailing Wage Appeals Board in response to the determination of the secretary to not pay sheet metal journeypersons the current prevailing wage,” she said. “I am also working on a developing a system that will help organize information in a way that helps direct the union to projects that might be breaking the law.”

Besides being the President of the Rutgers Employment and Labor Law Association, McCarty is a member of the law school’s recreational softball team, a Pro Bono Mediation Project leader, and the recipient of a dean’s merit scholarship.

The Browning Fund’s board explained why McCarty was the perfect fit for the fellowship, “Growing up with her father as a union representative, labor rights were discussed frequently at home. While law school was always the goal, it was taking classes for her Human Resource Management major that helped Shelby realize she could pursue this same subject matter on a higher level. Additionally, while working numerous customer service jobs throughout the years, she knew that labor law was crucial to bettering the lives of workers everywhere.”

The Peggy Browning Fund is a not-for-profit organization established in memory of Margaret A. Browning, a prominent union-side attorney who was a member of the National Labor Relations Board (NLRB) from 1994 until 1997. The Peggy Browning Fellowships provide law students with unique, diverse and challenging work experiences fighting for social and economic justice. These experiences encourage and inspire students to pursue careers in public interest labor law.