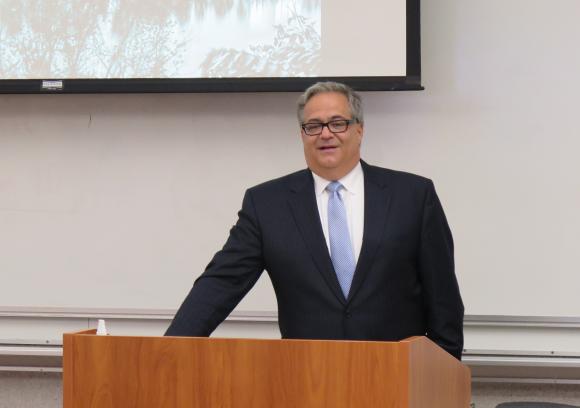 Chris Paladino talks about his experiences at DevCo and his new nonprofit organization ACDevCo.

Visitors today see a popular hotel with an iconic fountain, new dormitories and a thriving bookstore for Rutgers University, accessible parking garages, a revamped train station and other businesses that were completed in a large part by Devco, a private, nonprofit urban real estate development company.

Chris Paladino, CLAW ‘85, the president of Devco, talked to students in Professor Robert Holmes’ Community & Transactional Lawyering Clinic and Professor John Kettle’s Intellectual Property Clinic in mid-October about private/public partnerships. He explained how he’d like to see Devco’s success duplicated in Atlantic City, where ACDevco, has already begun redevelopment projects there – including a new satellite campus for Stockton University.

AC DevCo was created upon the recommendation of the  Governor's Commission on New Jersey Gaming, Sports and Entertainment. Three members of the Governor's Commission, including Professor  Holmes, serve on ACDevCo's Board of Trustees. ACDevCo was modeled on New Brunswick DevCo and Paladino now serves as its president.

As he detailed the complex negotiations and partnerships that Devco achieved, Paladino also had practical advice for the law students – to remain open-minded about their job prospects and to not be afraid to take chances.  “Don’t have tunnel vision, you never know what opportunities are going to come by,” he said.

Paladino also talked about changing philosophy regarding redevelopment in New Jersey – rather than encouraging train stations to commute residents out of a city, the idea is to bring people into a city; mixed-use developments can bring ground-floor businesses and services needed by residents who live in the apartment buildings above, and mixing low-income and market-rate housing allows developers to take advantage of tax breaks and loan opportunities for needed low-income housing.

Holmes said he wanted his students to get a glimpse at the complexities involved in creating a successful land deal and to also consider non-profit companies when thinking about future career opportunities, “The non-profit sector is much overlooked when it comes to business options.”