Law Students Will Help Veterans With Their Legal Issues 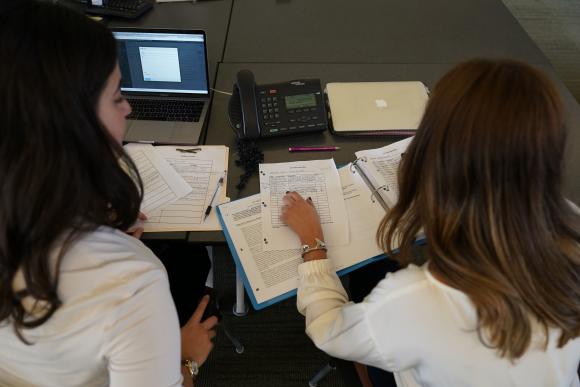 Clinic students will work to help local veterans in a project starting this fall.

New Jersey’s veterans will get a helping hand with their legal issues, thanks to a new project being launched by Rutgers Law School in Camden, overseen by Professor Traci Overton and the Civil Practice Clinic.

This fall, Overton and students in her clinic will embark on the Veterans Advocacy Project, an effort to provide much needed legal representation to New Jersey’s veterans, with a special focus on veterans challenging the wrongful denial of federal and state benefits for service-related medical conditions and veterans unjustly receiving “bad paper” discharges despite having Post-Traumatic Stress Disorder, Traumatic Brain Injury or another mental health disorder.

One of the students who will be part of the new veterans project is John McHenry, a veteran who is in his fourth year of law school, where he is earning a joint JD/MBA degree. McHenry worked in the Civil Practice Clinic previously and said he’s already come across a client who had to deal with child custody issues after being deployed.

“It is more and more prevalent,” he said. McHenry said New Jersey lags behind other states in some of the legal services offered to veterans. “Pennsylvania has their own special court and some New Jersey judges are not really familiar with federal and state laws that protect (veterans) from certain civil claims that may accrue when they’re gone.”

Besides custody issues arising from deployment, McHenry said there is also a need for veterans to get legal help with disability claims for health issues, including treatment for mental health issues that can lead to other problems, including homelessness.

Tara Carlin is another law student who will be working with the veterans project.  She said being part of the program will give her practical experience as a lawyer while helping an underserved population, “Veterans make up such a large part of the population today that understanding the unique challenges they face will be extremely beneficial to me in the future.”

McHenry said being part of a clinic helps both the clients and law students, “There’s a huge difference between knowing law and what you read in the books and practicing the law. Through the clinics, you get a lot of practical experience you just can’t get in a classroom.”

Rutgers has a longstanding commitment to veterans. Rutgers–Camden was the first Purple Heart Campus in New Jersey and, in 2018, Rutgers University was ranked third among all four-year colleges in a “Best for Vets” survey by Military Times.