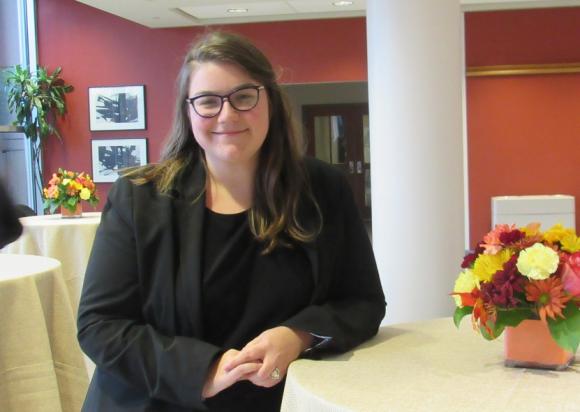 After graduating from Rutgers Law School, Tyler Dougherty RLAW'18 took her clinical experience and desire to “be a people’s lawyer” and worked in the Office of the Public Defender in Essex County.

Because of a 2017 state Supreme Court decision, Dougherty, focusing on issues involving juveniles who were sentenced in adult courts and given lengthy sentences.

She also represented young people in juvenile court and adult clients in hearings and trials.

Dougherty, a native of Ocean City, did this work with the help of a Post-Graduate Maida Fellowship. “The Maida experience provided a great opportunity to gain trial advocacy skills, improve my legal writing, and provided a larger understanding of the New Jersey criminal legal system,” she said.

Through Maida, Dougherty also was able to participate as a summer fellow in 2016 with  Community Legal Services in Philadelphia.

According to Jill Friedman, associate dean for pro bono and public interest, alumnus James Maida and his wife Sharon established the Maida Public Interest Fellowships Program in 2015 to acknowledge and support public interest work by Rutgers Law School students and graduates from both Law campuses. It funds approximately 40 summer public interest stipends each year, and one post-graduate fellowship for an exceptional recent graduate seeking to start a career in public service.

Dougherty has taken her experience and skills and is the new Pratt Criminal and Youth Justice Transparency Fellow at the law school. The project is focused on collecting and disseminating information about New Jersey’s juvenile and adult legal systems. She also directly represents incarcerated young people in the state in post dispositional legal matters. Going forward, Dougherty said she hopes to provide further legal support for youth-driven movements toward de-incarceration in her career.

Dougherty said she chose Rutgers Law, in part, because of its commitment to social movements but admits she wasn’t sure what being a social justice lawyer looked like in day-to-day practice. While at Rutgers Law, she participated in the National Lawyers Guild and the Women’s Rights Law Reporter. She credits Professors Laura Cohen, Alexis Karteron, and former visiting professor Jeena Shah for mentoring her and supporting her ideas. Dougherty participated in the International Human Rights Clinic, creating a white paper based on the Movement for Black Lives Policy platform and on a human rights assessment for Newark Public Schools and took part in the Criminal and Youth Justice Clinic, under Cohen’s supervision.

Dougherty said of Cohen, “She has never told me “no” when I’ve approached her about an idea of mine. She has only ever supported me to make my ideas better.”

Dougherty had two pieces of advice of law students—try to get into a clinic as soon as possible, and support local organizations with historical activism in Newark, such as the Newark Water Coalition, Newark Education Workers Caucus, and Homes and All. She said she wants to pay it forward by being available to students who may have questions about their own legal goals. She can be found on the fourth floor of the law school in Newark in the Criminal and Youth Justice Clinic.