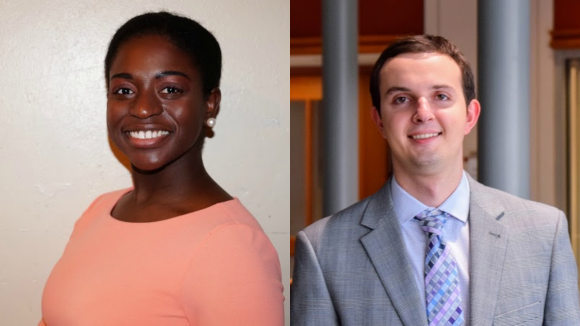 Over the summer, Damilola Onifade RLAW ’21 conducted research on several important social justice topics: getting fines and fees removed for juveniles in custody, how voting affects who is chosen to lead police organizations; qualified immunity for police officers; and the impact of the governor’s executive orders.

Onifade was one of the two inaugural Alfred A. Slocum Social Justice Scholars, who spent the summer working at the New Jersey Institute for Social Justice, a program for Minority Student Program students launched this year by Oliver Quinn RLAW ’75, chair of the Rutgers University—Newark Advisory Board and a former member of the NJISJ board.

It’s not just a 10-week internship, it’s beyond that,” said Onifade. Besides doing legal research, she said she studied data and got a more robust sense of research and writing.

Oleh Matviyishyn, RLAW ’22, was the other Slocum Social Justice Scholar. He said he jumped right in doing voting rights work – including researching whether people living in halfway houses were eligible to vote. He also did research on what other states’ eviction policies are under Covid-19. Matviyishyn said he also studied the issue of recording police officers, and the issue of liquid asset poverty, which examines whether New Jersey residents have enough savings to support themselves for three months.

“The New Jersey Institute for Social Justice is an organization that aims to tackle systemic inequalities and giving more individuals a fair opportunity to maximize their potential, along with maximizing a community's potential as well,” he said. “I have also never really had practical legal experience prior to this internship, and this was a great way to obtain it as the organization is using the legal field to help advocate for institutional change.”

Using the three pillars of economic justice, criminal justice reform, and democracy and justice, the New Jersey Institute for Social Justice works to ensure that residents of New Jersey have access to economic justice including meaningful employment opportunities and access to housing; promotes rehabilitative community-oriented alternatives to incarceration for youth; and advocates to expand access to our democracy, including through voting rights and participation, according to its website.

Both students said they were inspired to apply for the summer program because of previous work they had done on social justice issues. Matviyishyn, whose family emigrated from Ukraine, said he’s long been interested in how “law and government. . . can help others that are much less fortunate” previously worked with the New Jersey legislature. At law school, he is a member of the Student Bar Association, the International Law Society and works with the International Refugee Assistance Project, in addition to being a founding e-board member of a new Slavic Law Students Association.

Onifade was previously a fellow with the Center for Law, Inequality and Metropolitan Equity, directed by Professor David Troutt. She also worked with an affordable housing company and as an undergraduate helped register students to vote. She said she is considering applying for a fellowship to work on housing rights after graduation or a clerkship.

Quinn praised the partnership between the NJISJ and Rutgers Law School’s Minority Students Program for the success of the first summer of the scholar program, “"Kudos to NJISJ for making it work, and to the students for taking advantage of the opportunity.”
Both students said they appreciate the diversity and opportunity provided by Rutgers Law School and would encourage others to attend, so they can take part in programs such as the Slocum Scholars program.

Matviyishyn said, “I am more than happy to say that this program exceeded my expectation and I was exposed to and worked on many structural and institutional issues that the institute is trying to change, including police reform and addressing poverty.”