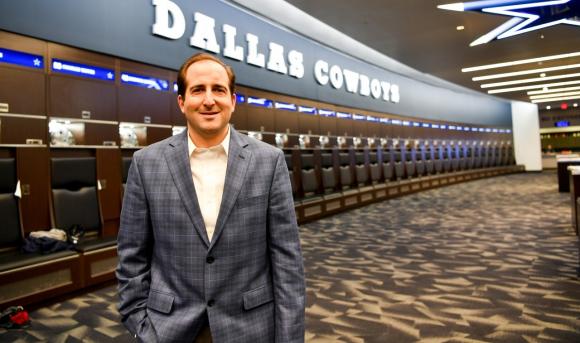 Jason Cohen RLAW ’06 had an interest in sports law from the very beginning. The summer after his 1L year, he interned for the Oakland Raiders legal department and after graduation, he turned down job offers to work for the Minnesota Vikings, even though it meant he had to work a second job to make ends meet.

In 2013 Cohen became the general counsel for the Dallas Cowboys.  According to the Dallas Morning News, he negotiated the naming rights for the team’s stadium with AT & T, helped develop the team’s practice facility and headquarters, as well as negotiating sponsorship and media deals and player and coach contracts.

Cohen credits his education at Rutgers Law with helping him get to where he is today, “As the General Counsel of the Dallas Cowboys and Jones Family of businesses, I give counsel on a variety of legal issues ranging from intellectual property to employment law to real estate issues. Rutgers allowed me to explore a wide range of legal subjects that has benefitted me from the NFL to Women’s Professional Soccer to NASCAR and now back to working in the NFL.”

Before landing with the Cowboys, Cohen, a North Jersey native, worked for the former Women’s Professional Soccer League and did a stint at NASCAR. He says those experiences helped him learn labor and employment issues, along with some intellectual property law.
He complimented his professors from Camden, “(I have) great memories from Rutgers Law School.  Professors like John Beckerman, Richard Hyland, Camille Andrews, and Sally Goldfarb, to name a few, challenged me in the classroom and outside the classroom. The curriculum was flexible and I took classes like local government and international arbitration that I never imagined I would still truly use today.”

His advice to current law students is to, “Take a variety of classes. Practicing law is complex and issues often cross over into subject matter you never planned to study.” He also said staying engaged as an alumnus helps lawyers connect and network in the legal field.