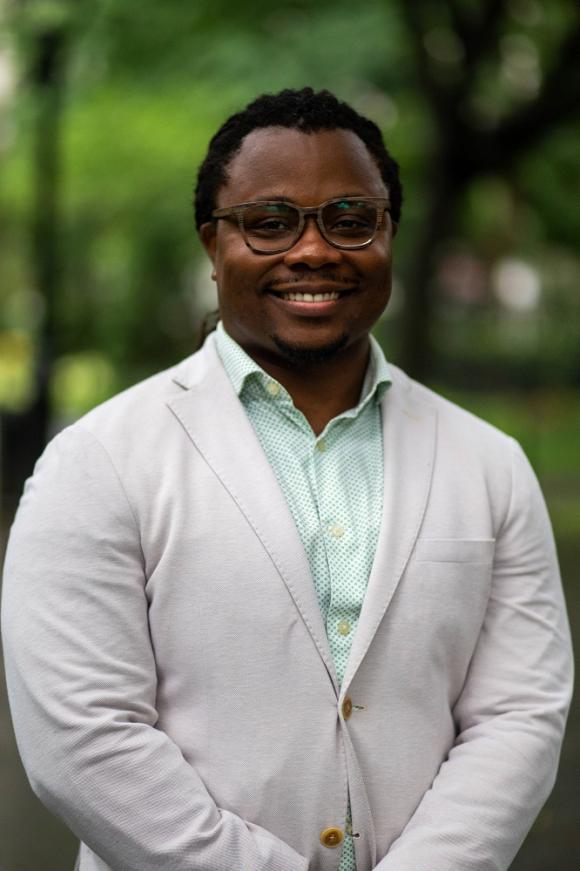 When Emahunn Raheem Ali Campbell came to Rutgers Law in 2018, he had already worked to free a wrongfully-incarcerated man. A college professor and former high school teacher with a Ph.D. in Afro-American studies, Campbell said working on the exoneration reinforced the idea he should go to law school.

Once he decided to go to law school, Campbell said he always knew he wanted to attend Rutgers. In 2012, he saw Professor Elise Boddie, then working as a litigator for the NAACP Legal Defense and Educational Fund, on a television show called Democracy Now and he emailed her about her work.

“I decided to attend Rutgers Law School, Newark, for two reasons. First, I wanted to work with professors Elise Boddie, Alexis Karteron, and Rachel Godsil,” he said. “I found their work at the NAACP Legal Defense and Education Fund, Inc., encouraging and inspiring. The idea of working with these three tremendous women with such extraordinary reputations and deep roots in civil rights litigation became my impetus for attending Rutgers.”

Campbell added that he was attracted to Rutgers’ reputation as the "People's Electric Law School," and its roots in the Civil Rights Movement,”I could not think of a better place to learn how to use the law to support marginalized and vulnerable communities.”

While at Rutgers Law, Campbell was a member of the Association of Black Law Students and served as its president for the 2019-2020 academic year. He also became the attorney general for the Northeast Black Law Students Association. He has been an Eagleton Fellow at the New Jersey Division of Civil Rights and the Social Equity Director of the Student Bar Association.

During his second year of law school, Campbell was a Kinoy-Stavis fellow, working in the Constitutional Rights Clinic. He also was a student in the Civil Justice Clinic, where he worked on a federal housing discrimination case, among other cases. For two years, he was a Street Law instructor and a legal observer at demonstrations in the tri-state area.

Campbell remarked on the tumultuousness of the country, during his years in law school, “There were a number of internal and external matters that we faced as a law school community. From issues regarding race at the law school; the murders of Ahmaud Arbery, Breonna Taylor, Tony McDade, and George Floyd; to the COVID-19 pandemic, we have been through so much.”

He said administrators and faculty members offered him support through difficult moments, “I also learned how to be an attorney from professors Karteron, Hayat, and Godsil, supporting activists, people in prison, and women who have been discriminated against. I could not have received a better legal education than the one I earned at Rutgers.”

After graduation, Campbell will clerk for Appellate Court Judge Thomas Sumners. He said of Rutgers Law, “You have the privilege to learn from some of the best legal minds in the world. Some use this education to maintain the status quo. Others use it to transform the world for the better. No matter what you do, know that this choice ultimately belongs to you.”