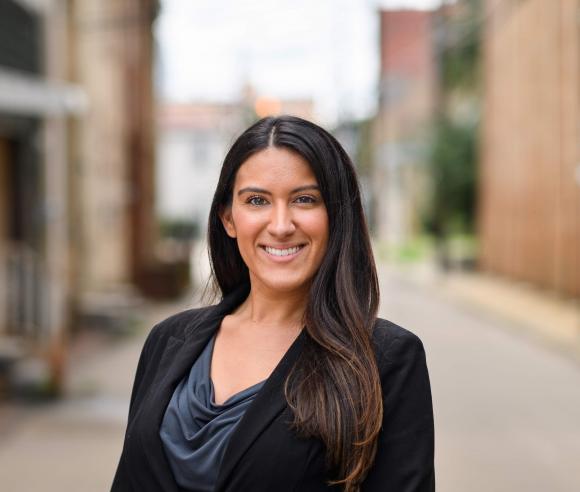 Kaitlyn Flynn RLAW '21 was an aspiring opera singer with a degree in voice performance who began to rethink her career path as she became more involved with politics and social justice movements.

She said she was inspired to go to law school “to effect change in my community” and was drawn to the affordability of  Rutgers Law and its welcoming culture and community.

“Rutgers Law has such an incredible focus on giving back to the community. Regardless of what legal setting I am working at in the future, Rutgers has instilled in me the desire to use my law degree to help others, whether that be through my day-to-day legal work, or through pro bono programs,” she said. “The externship opportunities I have been afforded through the Rutgers Externship Program have been a highlight of my time here at Rutgers Law.”

Flynn did pro bono work through the Domestic Violence Project, the Voters’ Rights Project, the Immigration Project, and the Volunteer Income Tax Assistance Program. She also was an extern at the Women’s Law Project and the U.S. Third Circuit Court of Appeals, along with working as an intern for a District Court Judge in Pennsylvania. After her 2L year, she worked as a summer associate at Cozen O’Conner.

“Externing at the Women's Law Project and at the United States Third Circuit Court of Appeals have given me real-world experience and allowed me to work with brilliant attorneys who are invested in me both as a student and as a future attorney,” she said.

Flynn, who grew up in Philadelphia, said she exposed herself to as many different areas of the law as possible during her years at Rutgers Law and will be clerking for New Jersey Supreme Court Justice Faustino J. Fernandez-Vina after graduation. After her clerkship, she will join Cozen O’Connor as a litigation associate in the firm’s Philadelphia office.

In addition, she participated in several activities in law school, including serving as a member of the Rutgers Law Review and a participant in the Hunter Appellate Advocacy Program. She also worked as a Legal Writing Fellow, Criminal Law Teaching Assistant and Academic Support Fellow, in addition to serving on the executive boards of the Women’s Law Caucus and Sports Entertainment Law Society.

Her advice to other students is to also get involved while studying law, “Take advantage of the experiential opportunities afforded to you here at Rutgers Law. You will learn an incredible amount just in one semester as an extern or through representing clients in the various pro bono programs and clinics available here.”