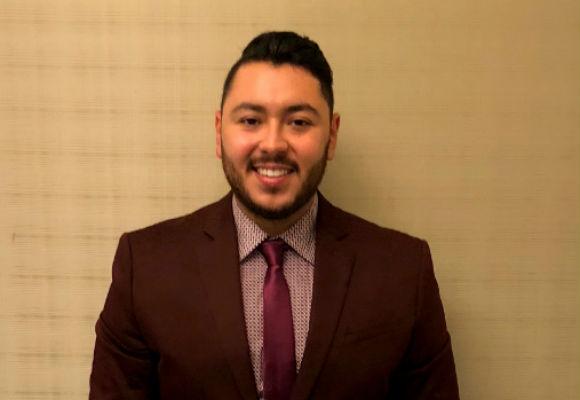 Growing up in Seattle, Christopher Bustamante Osorio’s interest in law began at a young age, when he saw injustices his parents faced in the United States after fleeing violence by drug cartels, dangerous living conditions, and corruption in Colombia in the 1980s.

"Sometimes they faced employment discrimination,” says Bustamante Osorio. “Or if they were taken advantage of, they weren’t able to remedy it any way legally because they were nervous about their status.”

His parents were undocumented when they arrived in the United States, but eventually became naturalized citizens. Hearing about and seeing what happened to his parents inspired him to pursue a career in law. His parents’ values, to treat everyone with respect and help those in need, have made him an advocate for marginalized people.

In 2012, the summer after his first year in college at the University of Washington, he participated in a month-long pre-law program led by Angela Baker, associate dean of students, and Jill Friedman, associate dean for pro bono and public interest at Rutgers Law School. Sponsored by the Law School Admissions Council (LSAC), the program provided grants to eight law schools, including Rutgers Law, to promote diversity in the legal field. The program gave him a taste of law school and created opportunities to meet with lawyers and government officials, including former Philadelphia mayor Michael Nutter.

When the time came to select a law school, the decision was an easy one for Bustamante Osorio.

“The whole law school is very connected, and it feels very familial,” Bustamante Osorio says. “It made the transition of moving across the country and leaving my parents and my younger brother back home in Seattle easier. I’ve had some tough moments in law school where I really needed to be around family, and Rutgers was able to provide that for me.”

When his grandmother passed away in January, the Rutgers Law community – faculty, staff, and his classmates – were there to support him.

After his first year of law school, he experienced a frightening encounter with a police officer, and through guidance and support from Baker and others, he was able to resolve his case in which he was a wrongly targeted as a crime suspect. When he returned to Seattle in the summer of 2016, he met with friends at a restaurant for happy hour. Bustamante Osorio had forgotten his wallet in his car, and as he was walking back to his car, he heard someone shouting at him to “get down on the ground.”

“The police officer got closer to me and I realized that he was yelling at me, and that’s when I saw that he had his gun drawn out and pointed at my head, then pointed it at my body, and was yelling at me to get on the ground.”

Bustamante Osorio says he was handcuffed and then told that he matched the description of a man who had stolen a car.

“Knowing what has been going on in today’s climate, I just was making sure of following the procedures that he wanted me to do,” Bustamante Osorio says. “My concern was not to die.”

Bustamante Osorio says police detained him for 40 minutes, even after he explained that he was going to his car to retrieve his wallet, offered his car keys to the officer and gave the officer permission to check the car, which was registered in the name of Bustamante Osorio’s mother. Finally, they agreed to go to his car with him and he unlocked it.

“The officer didn’t even look inside,” says Bustamante Osorio. “He said ‘OK’ and just took off the handcuffs and gave me my keys back.”

Bustamante Osorio reported the incident and reached a settlement with the city of Tukwila, Wash., and its police department.

At Rutgers Law, Bustamante Osorio has been active in Alianza, the Latino law students association of Rutgers Law School in Camden; OUTlaws, the Rutgers association for lesbian, gay, bisexual, and transgender law students; and the Women’s Law Caucus.

“As a gay Latinx man, many women have helped me become who I wanted to become,” says Bustamante Osorio. “I really wanted to get the experience of helping other people that I don’t have similar backgrounds with, and that’s why I started to get involved with the Women’s Law Caucus.”

Bustamante Osorio has worked extensively on behalf of LGBTQ individuals. He has participated in an externship at the Mazzoni Center in Philadelphia, a health care, legal services, and advocacy center for the LGBTQ community. He spent a summer in Chile working with Fundación Iguales to promote the passage of gender identity, anti-discrimination, and adoption laws to benefit the Chilean LGBTQ community.

Bustamante Osorio also has been active in efforts to assist immigrants and Camden residents living with limited resources and has volunteered at numerous naturalization and DACA registration events. In addition, he has served as an interpreter/translator for the Rutgers clinical program. He was an intern at the New Jersey Department of Children and Families.

A strong advocate for women’s rights, he worked in Rutgers Law School’s Domestic Violence Clinic, where he and his partner successfully won a restraining order for their client, and served as vice president of Rutgers Women’s Law Caucus. After the 2016 presidential election, he helped convene a “safe spaces” event to promote civil dialogue among members of the law school community.

When he joins classmates from the Rutgers Law School’s Camden location to receive their degrees Thursday, May 17, at the BB&T Pavilion in Camden, his parents and his brother will be in the audience to cheer on the family’s first law school graduate.

“I have seen him mature from a college student to a very active and involved law student leader, developing excellent public speaking skills,” says Baker. “His dedication to helping others is evident in everything he does. I am sure that he will be successful in his career, and continue to serve as a role model for underrepresented students interested in law.”

Bustamante Osorio believes his Rutgers Law experience has prepared him well for his future in the legal profession.

Beginning in September, he will be working as a clerk for Hudson County Superior Court Judge Anthony D’Elia.

In the future, he hopes to work in family law, criminal law, and civil rights law. Eventually, he plans on going into politics and running for office.