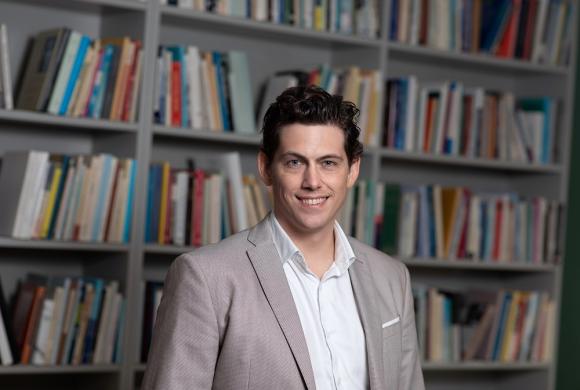 Professor Peter Mancina is spending the school year at the Center for Immigration Law, Policy and Justice.

Peter Mancina is a visiting scholar for the 2020-21 school year in the Rutgers Center for Immigration Law, Policy and Justice. He is a cultural and political anthropologist who studies government power, policing, immigration control, every day policy implementation, and social movement organizing.

What kind of work will you be doing at the Center?

I’ll be investigating how New Jersey law enforcement at the local and state levels is implementing Attorney General Gurbir Grewal’s Immigrant Trust Directive – a “sanctuary state” style directive passed in 2019. We (Vice Dean Rose Cuison-Villazor and I) also will be examining the extent to which law enforcement agencies abide by state public disclosure laws when it comes to handing over information to the public about how they assist federal immigration enforcement agencies. This work will scrutinize publicly disclosed documents that we obtain from over 500 agencies throughout the state, and if what I’ve seen in other locations throughout the country is happening in New Jersey, we will likely unearth the manifold ways that law enforcement is continuing to help detain and turn over people for deportation.  We additionally plan to hold a symposium later in the year to discuss our findings and to bring the Rutgers community together with the immigrant rights community and the media in conversation about issues of police transparency, public disclosure, and the Immigrant Trust Directive.

What made you want to come to Rutgers Law?

Though I’m an anthropologist, I’ve long admired and benefited from the work of Vice Dean Cuison-Villazor and Distinguished Professor Linda Bosniak, both who have written extensively in two of my main areas of interest - sanctuary city governance and transformative forms of citizenship. Rutgers Law seems to be an exciting place with exciting people interested not only with how power, politics, and the law work today, but also how such things might function in a more egalitarian world.

Talk about your previous experience and career journey

I’m anthropologist by academic training, but ultimately my work is focused inside and outside of academia on disrupting the normal functioning of oppression and exploitation. My work has focused on the history and current day functioning of governments that implement sanctuary city and sanctuary state policies. When I first started examining this topic back in 2010, I thought that I would find what both the Left and the Right agreed sanctuary cities were – spaces of protection of undocumented immigrants, autonomous zones or spaces outside of nation-state control – “spaces of exception.” I expected to examine a strategy of government that established a sort of anti-panopticon or a state that looked the other way. What I found was the opposite – an ever more thorough state that sought to see, incorporate, manage, and illicit the participation of undocumented people, making the control of city populations all the more complete and efficient. Further, I came to see how pro-immigrant ideologies about protecting people from deportation actually can serve to paradoxically justify deportations of those that the state considers unworthy of sanctuary: primarily people accused of committing crimes. From that point on, I have examined how humanitarian narratives of the rebellious sanctuary cities actually mask their operation as humanitarian deportation machines that link the municipal with the federal in a more palatable way for liberal democrats. This focus has led me to work with critical criminologists at the University of Oxford and in the Border Criminologies network, and with the immigrant rights movement seeking to transform sanctuary cities in a manner which stops all city assistance for immigration enforcement and truly renders national citizenship an irrelevant technology of rule.

What would you like law students to know about your field?

Anthropology is my academic home for a few critical reasons. First, it is a field that is increasingly aware of and working on many of its own psychoses so to speak – it’s past and present complicity with colonialism for one - and constantly trying to root out more of them as time goes on. While anthropology has historically been descriptive of the lives of people from all over the world, we increasingly turn our gaze upon the powerful in our own communities, including in places like San Francisco City Hall. In shedding light upon the processes we study by doing ethnographic fieldwork, we often render them legible, more knowable, and therefore more manageable or even controllable if political will is applied. Therefore, many of us are knowingly using anthropology for transformative purposes – knowing what goes on behind the closed doors where the machinations of power are functioning outside of the public’s view, so as to critique that power and imagine other ways that it might function. In this way, anthropology is a toolbox of critical methods, aspirational questions, and is filled with anticipatory hope.

Also importantly, it is a method for us to work upon ourselves as people and as researchers – we spend years in communities, organizations, institutions, agencies, corporations, courtrooms, squad cars, and slums, learning how to be understanding and respectful community members in communities that are not our own and to be participants in the processes that we are studying. We learn skills and contribute to these processes in the course of understanding them and writing about them. In this sense, anthropological methods are “techniques of the self”, techniques of research, and techniques of structural transformation.  This makes for a dynamic and vivid engagement with emergent socio-cultural and politico-legal phenomena in places that are not accessible to people who have not learned how to engage the world in which these phenomena take place. Lastly, anthropology is very inclusive of scholars who come from other disciplines and who utilize the analytical and methodological skills they have obtained in legal studies, policy studies, political science, sociology, and history to their anthropological fieldwork.  It also makes it easier for us to work with colleagues outside of anthropology who nonetheless approach the topics we are interested in.