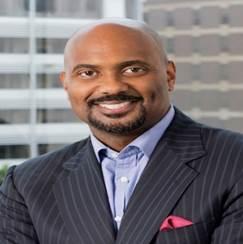 Though he had no lawyers in his family, Miguel Alexander Pozo RLAW ’98 said he remembers wanting to become one as early as the age of seven, and recalls that as a boy he would translate documents from Spanish to English for his parents, who had emigrated to New York City from the Dominican Republic in the early 1970s.

“It was great,” he recalled. “As a 19-or-20-year-old student, I worked and learned firsthand what lawyers – corporate lawyers – did.  It was a far cry from the world I had left behind in Washington Heights in Manhattan and Kingsbridge Road in the Bronx.”

After graduating from Hofstra, Pozo worked at Willkie Farr & Gallagher as a legal assistant, saving money for law school and studying for the LSAT.  It was during that stint, that he met Mitchell Auslander RLAW '80, a partner at the firm. Auslander told him about Rutgers Law and said he thought Pozo would love it there.

After visiting several law schools, “I was on the fence because I wanted to live, study, and ultimately practice in New York City.  Then I met Dean Janice Robinson,” Pozo said, the then dean of the law school’s Minority Student Program. “She was a gamer changer for me.  Dean Jan and I instantly hit it off. We talked for what seemed like hours before I decided to enroll.  In fact, we remain very close to this day.  As I toured the school, I felt the electricity, the energy, and the enthusiasm of diverse students that seemed to come from all across the country. It was just a magical place. I had visited other law schools, but I didn’t experience anything like what I saw and felt at Rutgers.”

Once he started at Rutgers Law, Pozo threw himself into his studies and became involved in law school activities. Besides being a part of the Minority Student Program (MSP), he was on the Moot Court Board, was a member of the Association of Latin American Law Students (ALALS), and was one of the founding members of a new law journal called Rutgers Race & the Law Review.  He also credits his time at the law school with helping him develop very meaningful personal and professional relationships, including with Judge Esther Salas RLAW '94 and Camelia Valdes RLAW '96, now the Passaic County Prosecutor, to name just a few.

Because of his experiences growing up, Pozo had decided early on that he would become a prosecutor in New York City.  His goal was to achieve better and fairer treatment of people of color who he felt were often prosecuted and incarcerated for lengthier sentences than non-minority defendants charged with similar offenses. During his 1L year, Pozo was encouraged to participate in the MSP Fellowship program and spent that summer at Lowenstein Sandler, a move that changed his career trajectory.

Pozo still wanted to explore becoming a prosecutor, so he spent his 2L summer at an internship at the United States Attorney’s Office for the Southern District of New York.

After law school graduation he clerked for Judge Lawrence Lawson, then the Assignment Judge for Monmouth County and was hired at Lowenstein Sandler.  Pozo spent 17 years at the firm as a commercial litigator and was a founding partner of the firm’s Washington, DC office before going in house to work for his client Mercedes-Benz USA.  While at Lowenstein, he represented such high-end luxury brands as Louis Vuitton Moet Hennessy (LVMH), TAG Heuer, Thomas Pink, Cartier, and Christian Dior.

He also diversified his practice and took on internal investigations, employment law cases, and trademark cases, becoming the second partner of color at the firm in two decades, after his mentor Zulima Farber RLAW '74, who became the first female partner at the firm in 1986. Pozo now works at Cozen O’Connor as a partner in the commercial litigation department, dividing his time between its offices in Minneapolis and Newark.  He spends most of his days in Minneapolis with his wife and two sons.

While at Lowenstein, Pozo actively recruited and mentored law students from Rutgers Law School. He also visited incoming 1L minority students during the annual MSP orientation and said he could hear his grandmother’s words in the back of his mind, “When you become a lawyer, promise me that you will never forget where you came from and that you will never stop helping others get to where they are going.”  It was these early lessons, he said, that fuel his work ethic and desire to give back.

Having served in high Hispanic bar association offices and as acting general counsel for Mercedes-Benz, Pozo has worked to open up opportunities for young lawyers of color, especially those of Latinx heritage in corporate settings.  “Our numbers are woefully low when we consider the Latinx population in the United States.  There remains significant room for growth,” he said. “There’s a tremendous opportunity to continue to diversify the profession. . . There’s a lot that still has to be done.  For example, we have to deal with micro-inequities, cultural bias, and an unwillingness to meaningfully address and remove barriers to success.”

As an ambassador and staunch supporter of the Rutgers Law brand, Pozo has joined the newly created Deans Advisory Committee and serves on its Revenue Generation Subcommittee, whose purpose is to expand ancillary revenue streams for the law school. “It’s not just about my individual success,” he said. “It’s about giving more than I have taken; its about opening windows and doors for others.  It is about creating a meaningful and lasting impact on our communities through the legal profession.”

His advice to law students is threefold: “Don’t be afraid to be your true authentic self, define success for yourself and then decide that you are going to be successful, and lastly, as Michael Jordan once said, 'Take the shot, because you will miss 100% of the shots you don’t take.' Rutgers allowed me and will allow aspiring lawyers, to do all three.  Equally important, it will empower law students to find their own voices in the law. . . Dare to dream.  Think about digging deep and finding out who you are.  Tap into your purpose.  Rutgers is a tremendous place to do just that.”