Much Still Needs to be Done, say Keynote Speakers at the 50th Anniversary of the Women's Rights Law Reporter 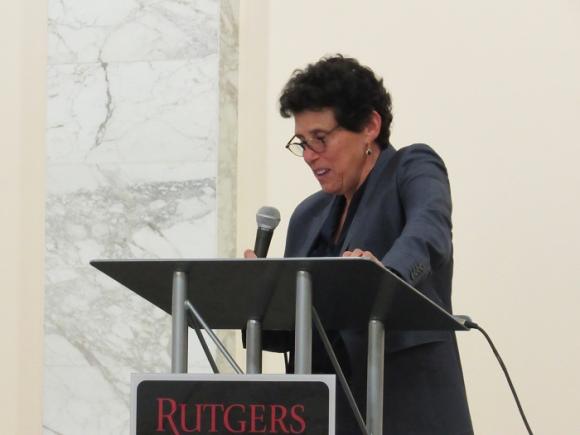 Debra Katz, the attorney for Christine Blasey-Ford, encouraged women to come together to fight for collective action. Katz was the keynote speaker for the 50th anniversary of the Women's Rights Law Reporter.

Fifty years ago when a group of women students at Rutgers Law School approached then-Professor Ruth Bader Ginsburg about starting a journal devoted to women’s rights, there were few female faculty members, and sexist banter was common, said Elizabeth Langer '73, the first editor-in-chief of what would become the Women’s Rights Law Reporter.

Langer, who spoke at the law school for the journal’s 50th anniversary, recounted an uphill battle to get funding, office space, and administrative support. “It would not be a piece of cake,” recounted Langer, who said students wrote fundraising letters and sought grants to get the journal started and one of the legal clinics housed at Rutgers offered to share office space.

The first issue was published in the spring of 1972 and focused on shorter legal articles and graphics that were collectively chosen by the journal’s 19 student volunteers. Langer said the group was lucky to have Ginsburg as its advisor, “She had a deep interest in women’s rights issues.”

Being part of the fledgling journal “had a lasting impact on all of us,” Langer added, adding that she went to work for New York Congresswoman Bella Abzug after graduation. Langer encouraged current law students to stay active in women’s rights, “Progress has been made but much needs to be done.” 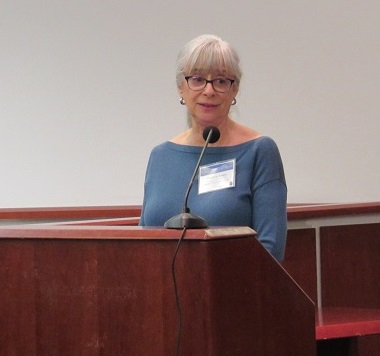 Elizabeth Langer was the first Editor-in-Chief of the Women's Rights Law Reporter.

During the daylong celebration in early March, experts were invited to give talks on reproductive justice, justice for incarcerated persons, and economic justice. The anniversary celebration was capped off with a gala featuring keynote speaker attorney Debra Katz, who represented Dr. Christine Blasey-Ford during the Kavanaugh confirmation hearings.

Katz, who also represented one of Harvey Weinstein’s victims, told students they are living in “overwhelming times” with rollbacks to Title IX protections, inhumane abuses at the Mexican border, threats to reproductive rights and civil rights.

“I am more resolute than ever,” she told the audience. “We are going to retake our democracy.”

Katz said the Weinstein sex scandal showed attitudes towards sexual violence have shifted and that Blasey-Ford’s testimony was a defining moment in American history, “She gave voice to millions of women around the world who have experienced violence.” She talked about other strides women have made, including participating in the Women’s March around the world, taking action against Weinstein, and being aware of the president’s degrading remarks about women.

“Use your voices and law degrees to empower each other and to lift each other up,” she challenged the law students. “Equal rights for women in a moral imperative. It’s not a meme, it’s not a hashtag.”

Katz said more work needs to be done to stop sexual violence against women, and increase low-wage pay by strengthening unions. She urged women to come together to fight for collective action.

“We need to put the world on notice that change is coming and we’re not going back,” she said. “We are all agents of justice.”