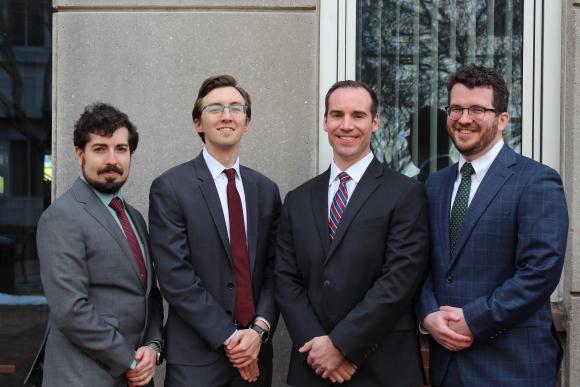 To finish out a successful year, the Rutgers National Appellate Advocacy Team advanced to the Octofinals (Sweet 16) of the ABA National Appellate Advocacy Competition earlier this month, before being knocked out of the competition by Loyola University of Chicago. In a competition of 178 teams representing 104 ABA-accredited law schools around the country, Rutgers advanced to the top 16 in the entire competition. Team members Jack Byrnes ('22), Anthony Sirianni ('22), and Guy Yedwab ('22) competed. The team had previously won the regional rounds of this competition earlier in the season.

The Team is selected through a competitive try-on process and trains rigorously under the direction of coach Stephen Marietta ('17). Since revamping the program several years ago, the Team has continued to raise the profile of Rutgers Law in national competitions, besting teams from schools with greater resources. Stephen Marietta has done an extraordinary job in enhancing the National Appellate Team program – a program that he participated in while at Rutgers Law.   He is a wonderful mentor and has shown a deep dedication to enhancing our appellate advocacy program overall,” said Andrew Rossner, Associate Dean for Professional and Skills Education. Each of the competitions involved writing a U.S. Supreme Court brief and delivering a series of 30-minute oral arguments. Throughout each of the competitions Rutgers competed in this year, attorneys and judges from around the country routinely praised the Team’s exceptional oral advocacy skills. “Many judges noted that our advocates were better and more prepared than practicing attorneys,” Marietta remarked.

Graduating members of the Team include John Byrnes, Tom Lloyd, Rebecca Lundgren, Ajda Sejdinovic, Anthony Sirianni, and Guy Yedwab. “It has been a pleasure coaching the hard-working and dedicated members of the Team this year,” Marietta added. “Each of them has represented Rutgers incredibly well, and I look forward to seeing what their futures hold.”