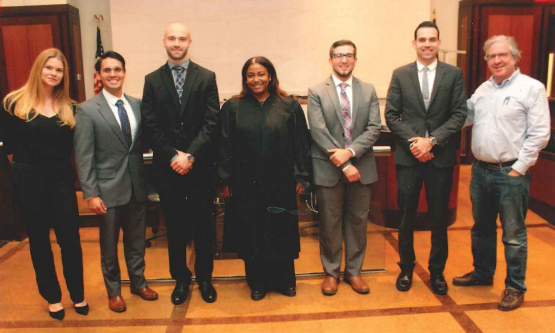 The Rutgers Law Moot Court Board’s National Trial Team had a strong opening to its fall season with a third-place finish out of 16 teams, in the Queens District Attorney’s Invitational Mock Trial Competition, besting St. John’s Law in the semi-final round, during the weekend of Oct. 19-20.

First place went to Fordham and Second Place went to Pace. Only six teams advanced to the finals from a field of 16.

In each round of the competition, the team conducts a full trial of a homicide case before sitting Judges in Queens County. The case is tried before a jury under New York Evidence Law and procedure. In the preliminary rounds, Bosco, Gallinger, Avalos, and Hotchkiss, won their rounds and earned a spot in the semi-finals. Bosco and Avalos, representing the prosecution, went up against Touro Law School and Gallinger and Hotchkiss, representing the defense, went up against CUNY Law. In the semi-final round, Bosco and Avalos, again representing the prosecution, bested St. Johns Law School.

This is the third year Rutgers Law has participated in the invitation-only competition. It is the first year the team earned third place and the third year it earned a semi-finalist position. The Queens DA Competition is an annual competition between nationally and regionally selected teams invited to compete based upon their record. As such, it is a competition among some of the most competitive trial teams in the country.

The national trial team continues to raise Rutgers Law's national profile for mock trial competitions, said Professor Andrew Rossner, who oversees that Moot Court Board’s National Trial Team program at Rutgers Law, “We all should be so proud of how well our students performed representing Rutgers Law. Many thanks to the team’s coaches. It was a great start to the team's 2019-2020 season.”