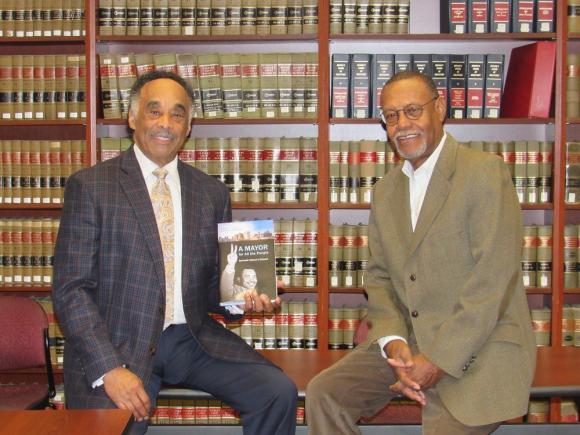 Professor bob Holmes, left, and Richard Roper, right, are the editors of a new book about Kenneth Gibson.

When Kenneth Gibson was elected Mayor of the City of Newark in 1970, he was the first African-American mayor of any major Northeastern city.

It was a pivotal time in the city, which was recovering from a 1967 Rebellion. One of the first people Gibson chose to become part of his new administration was Robert Holmes, who had just graduated from Harvard Law School and who was selected to serve as the new Director of Housing and Development.

Holmes, now Director of the Community and Transactional Lawyering Clinic at Rutgers Law School, recalled, “My job was to attract investors and developers to the City of Newark in spite of the negative impression left behind by the Rebellion and by a continuing negative image attributed to the city by the media.”

In 1975, Holmes left the City of Newark to become the Assistant Commissioner of the New Jersey Department of Community Affairs. He was at the time the highest-ranking African-American in then-Governor Brendan Byrne’s administration. Gibson was reelected for three consecutive four-year terms until he was defeated for a fifth term by city councilman Sharpe James. After stepping down, Gibson, whose legacy was regarded as mixed, gave interviews with major media outlets acknowledging his frustrations in not accomplishing as much as he’d hoped, along with noting successes he achieved.

It is against this backdrop that Holmes began talking to the former mayor about his legacy. Holmes said he spoke to Gibson in 2015 about an idea for an article about Gibson’s tenure as mayor. “He thought his whole story had not been told,” Holmes said. But once the professor began interviewing people about Gibson, his project went from an article to the outline of a book

This fall, Rutgers University Press has published that book, A Mayor for All the People: Kenneth Gibson’s Newark which was edited by Holmes and Richard W. Roper, a New Jersey public policy expert. Holmes and Roper will talk about the book and sign copies on Monday, December 9, starting at 5 p.m. in the Essex Room of the Robeson Student Center on the Rutgers University-Newark campus.

Roper is a member of the Rutgers University Board of Governors and Rutgers University–Newark Advisory Board. He is also the founder of the Roper Group a public policy consulting firm.  He has held executive policy and planning positions with the Port Authority of New York and New Jersey, and administrative and teaching positions at Princeton University’s Woodrow Wilson School of Public and International Affairs. Roper also has served in federal, state and local government positions, including the Office of Secretary, U.S. Department of Commerce; the Division of Youth and Family Services, New Jersey Department of Institutions and Agencies; the Vice Chancellor, and the New Jersey Department of Higher Education. He also played a mediatory role in resolving the Black Organization of Students’ takeover of Conklin Hall at Rutgers-Newark in 1969, a watershed moment in Rutgers history.

“I wanted to give readers a more balanced view of Ken than anyone had done before,” Holmes said. “It comes from the view of a wide range of people, those who criticized and those who praised.”

Holmes said the title: A Mayor for All the People is meant to be tongue-in-cheek, and refers to Gibson being criticized for trying to be the mayor for all of Newark’s residents, instead of catering to any particular constituency. Holmes stayed in touch with Gibson about the book project and conducted one of the last interviews with the former mayor before Gibson’s death in late March.

Holmes said, through the book, he hopes readers will learn more about Gibson and his legacy as a pioneer in American politics. “He’s a historic figure, nationally-renowned,” Holmes said. “He’s someone who set many things in motion that reverberated around the country.”
The book can be purchased for $34.95 at Barnes and Noble or Amazon.