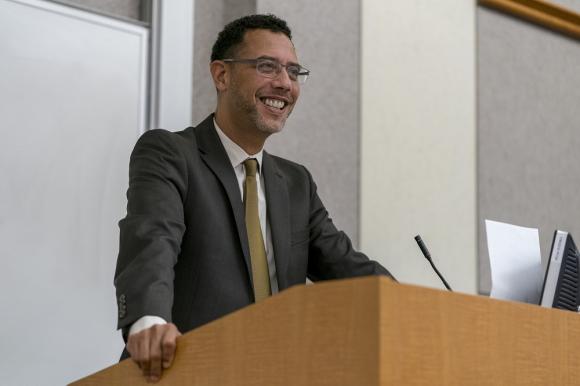 The idea to fight evictions with a right-to-counsel for indigent city residents was proposed by the Center for Law, Inequality and Metropolitan Equity in 2017.

Indigent residents of Newark facing eviction can soon get free legal help through the city’s right-to-counsel ordinance, which was recommended in 2017 and spelled out in a memorandum by the Rutgers Center for Law, Inequality and Metropolitan Equity (CLiME).

The City of Newark adopted the right-to-counsel ordinance, based in part on CLiME’s recommendation, in December 2018 and began implementing it this spring.

CLiME, a member of the city’s local affordable housing coalition, is a partner with the city to implement the right-to-counsel ordinance–the third such ordinance in the country. Rutgers Law Professor David Troutt, the director of CLiME, submitted a comprehensive memorandum to the city in February with recommendations for implementing a system of free legal services for indigent residents and information supporting its legality under New Jersey law.

“The affordability crisis that ensnares much of Newark’s working-class population of almost 300,000 people disrupts the life chances of its most vulnerable citizens,” said Troutt. “Housing stability anchors a household’s ability to plan for productive lives.  In contrast, housing instability often overwhelms those lives in countless ways.”

His memorandum also pointed out that housing instability comes from many causes – unlawful rent increases, disputes over the conditions of the dwelling, non-payment because of a reduction of work hours, tenant harassment, building sales and foreclosures, and people being ejected from unlawful sublets.

Providing legal assistance to tenants who cannot afford to fight eviction is a step towards combatting homelessness.

The City of Newark recently hired a Rutgers Law School graduate, Khabirah Myers RLAW ’04, as the new Office of Tenant Legal Services Coordinator in its steps to implement the right-to-counsel ordinance. According to a news release from the City of Newark, Myers began offering prop bono legal representation to low-income residents facing eviction on June 6.

Troutt pointed out that without legal help, tenants often leave their homes before a landlord takes them to court because they do not know how to put forward legal defenses. They become displaced without sharing information about the habitability of their homes, complaints about heat or hot water, or the safety or sanitary requirements of the property. “Many of the issues that displace tenants never reach a judge in an eviction proceeding,” Troutt said.

He pointed out that providing legal services to fight eviction is a critical emergency step toward helping city residents who are often struggling with additional issues, such as physical or mental disabilities or involvement with the criminal justice system or welfare agencies.

The memorandum was based on interviews with legal service providers, community coalition members, officials in the state judiciary, and legal research conducted by CLiME Fellows as well as Rutgers Law students in the Civil Justice Clinic.