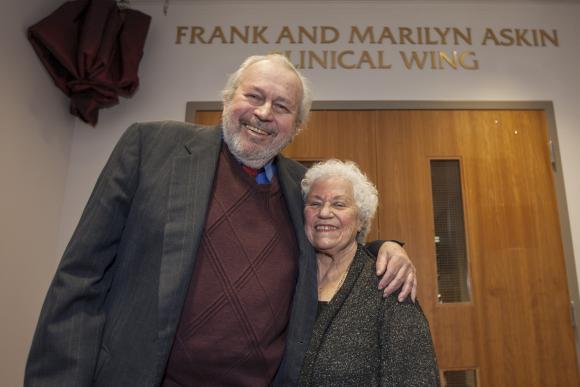 Frank Askin, left, and his wife Marilyn, when the Rutgers Law School Clinical Wing was dedicated in their honor.

Frank Askin, Rutgers Law School professor for 50 years and longest-serving General Counsel of the ACLU, died July 1 at the age of 89 at a hospital in Fort Lauderdale, Florida.  The cause of death was listed as cardiac arrest.  At Rutgers, he was a Distinguished Professor of Law, Robert E. Knowlton Scholar, and Director of the Constitutional Litigation Clinic  (now the Constitutional Rights Clinic). The school will hold a memorial service for him this fall.

Frank Askin had hoped to be “carried out” of the Law School but finally retired in 2016 after 53 years at Rutgers, where he was a nationally known constitutional law expert. Upon his retirement, he was awarded the Rutgers Medal, and the clinical wing of the law school was named after him and his wife Marilyn.  In 2017, he also received the American Association of Law Schools (AALS) Clinical Section's highest honor, the William Pincus Award, and the Great Teacher Award from the Society of American Law School Teachers (SALT).

In September 1963 Professor Askin entered Rutgers Law School in Newark as a student — after an earlier career as a journalist.  He was appointed to the faculty directly upon his graduation with highest honors in 1966.  Admitted to the law school without an undergraduate degree, he was awarded a B.A. from City College of New York at the same time he received his J.D. from Rutgers.

As a student, one of his professors was Ruth Bader Ginsburg and when appointed to the faculty, they became colleagues, both teaching Civil Procedure. Professor Askin is credited with having introduced his colleague to the Legal Director of the American Civil Liberties Union who was visiting Askin at the Law School;  she was later named head of the Women's Rights Project. They served together as ACLU General Counsel for several years before her appointment to the Court of Appeals for the D.C. Circuit by President Carter.  Askin also taught Labor Law, Election Law and Constitutional Law and in 1970, he established the Constitutional Litigation Clinic.

Under his guidance, the clinic litigated the first government surveillance cases in the nation, including taking the seminal case on Army surveillance of Vietnam War resisters to the US Supreme Court, challenging the New Jersey State Police for stopping and searching “long-haired travelers” on the state’s highways, and battling the FBI over the investigation and maintenance of files on two precocious New Jersey high schoolers who corresponded with “the wrong persons”.  He is also known for his work defending affirmative action programs in the U.S. Supreme Court, arguing for the rights of the homeless to vote and to have access to public library facilities, and protecting the right of grassroots advocacy groups to take their messages door-to-door and to privately-owned shopping malls.

Professor Askin and his students successfully extended the free speech provisions of the New Jersey Constitution to protect homeowners in privately-run residential communities, making New Jersey the first state to provide such protection through litigation.

He and his family spent his sabbaticals in Washington, D.C., where he worked on the House Labor Management Committee for Rep. Frank Thompson, a Trenton, N.J. Democrat, and Rep. John Conyers, Jr. of Detroit, Michigan, co-founder of the Congressional Black Caucus and chair of the House Judiciary Committee.  He was also a visiting professor at the University of Hawaii Law School in 1975 during its second year of existence and was invited to seek the deanship, but the family voted to forsake paradise for a return to what they considered the real world, Newark, NJ.

Professor Askin was a member of the National Board of the American Civil Liberties Union for 40 years as well as on the ACLU’s New Jersey affiliate board, and served for 36 years as one of ACLU's four General Counsel, the longest serving General Counsel in ACLU history. He continued as General Counsel Emeritus until his death.

Following stints in Washington, D. C., the family returned to New Jersey with Potomac fever and in 1982 and 1986, he waged two quixotic bids for Congress despite participation in fund-raising efforts by John Kenneth Galbraith, Dick Gregory, Ramsey Clark, Paul Robeson Jr., Gloria Steinem and Florynce Kennedy, Barney Frank, Ed Asner, Pete Seeger, Arlo Guthrie, Martha Schlamme, and others in the liberal and Peace Now establishment. Following his last defeat, he abandoned politics for Duplicate Bridge and with his wife Marilyn as his partner they became Silver Life Masters. In the 70s until his retirement to Florida, he hosted a weekly poker game at their West Orange home for faculty and friends.

Professor Askin was one of the featured writers on the Star-Ledger’s NJ Voices.com. His memoir, Defending Rights: A Life in Law and Politics, was published in 1997 by Humanities Press.

He was born in Baltimore to Abraham Askin and Rose Mervis Askin.  His father's family immigrated to the United States from Kiev following the first pogrom by the Cossacks against the Jewish “shtetls” in the 1880s, and the family landed in Norfolk, Va.  His mother came to the United States at the age of 2 rom Riga, Latvia.  His father was the proprietor of the Biltmore Tavern in the Hotel Biltmore (known later in a play as the Hot l Baltimore) now the site of the Thurgood Marshall Law Library of the University of Maryland’s Carey Law School.

His first job was as a 12-year-old working the manual wooden scoreboard for the professional basketball team the Baltimore Bullets (then owned by his Uncle “Babe”), now known as the Washington Wizards.

Two brothers predeceased him:  Stanley Askin, who landed on Omaha Beach on D-Day and later became the first president of the U.S. Ranger Battalions Association of World War II; and Murray Askin, a Baltimore accountant.

Frank Askin dropped out of the University of Baltimore to spend his late teen years as a community organizer, conducted sit-ins to integrate the Jim Crow Baltimore tennis courts, and came to New York as editor of New Challenge Magazine, a publication of the Labor Youth League.  The future playwright Lorraine Hansberry was on his staff, and he recalled spending many hours at her home while she read excerpts from the play she was writing “Raisin in the Sun.”

When the magazine died under cold war pressures, he became a reporter for a New Jersey weekly and later an editor at the Bergen Evening Record in Hackensack where he met his future wife, Marilyn Klein. They eloped secretly, as married couples were not permitted to work together. He was fired by the Record after an unsuccessful attempt to organize the paper under the American Newspaper Guild but succeeded in getting desk jobs nights at the Telegram and the Daily Mirror while attending CCNY to obtain a college degree so he could go to law school.

All the while, he was hounded by J. Edgar Hoover's FBI.  Freedom of Information Act documents revealed the Bureau checked on his “subversive” activities at all his places of employment – at Rutgers Law School and at the Newark Star Ledger where he worked nights and at the New York Post one night a week while attending Rutgers during the daytime.

The late Dean Willard Heckel knew of his background and admitted him to law school with 96 college credits. Upon graduation, he was appointed to the faculty. Dean Heckel also appointed him chair of a committee that was created following the Newark rebellion in 1967 to create a program to admit more Blacks, disadvantaged whites, and women.  The Minority Student Program became a model for other law schools in the nation.

Former Co-Dean Ron Chen shared these memories, "It was my honor to follow him in so many ways: we both were students (at different times) and then later professors (happily for me, often at the same time) here at the Law School. I was his colleague on the ACLU National Board for many years (where the ACLU President jokingly referred to us at Board meetings as "the Jersey Boys"), and I now hold the office that he held for decades, that of ACLU General Counsel.  It was my privilege to work with him in the Constitutional Litigation Clinic on several difficult and impactful cases (Sussex Commons v. Rutgers University and Mazdabrook v. Khan come immediately to mind).  He first taught me the benefits of relying on the New Jersey Constitution as the often preferred tool over the United States Constitution in expanding the reach of individual civil liberties, particularly speech.  . . . . I think on the names of people whom I passed daily in the hallways when I first entered this Law School as a student 41 years ago but who are now sadly no longer with us – including Arthur Kinoy, Al Slocum, Annamay Sheppard, Nadine Taub, Willard Heckel, Al Blumrosen, and now Frank Askin.   I cannot help asking, will we ever see their like again?  Of course the answer is yes.  For every great institution, as one generation passes, a new one must rise to take its place.  But I confess that right now I personally cannot imagine holding any group of people in any higher awe and esteem as I do Rutgers Law's ‘Greatest Generation,’ with Frank Askin leading the charge.”

Frank and his wife, Marilyn, had three children:  Andrea (now deceased); Jonathan, a professor at Brooklyn Law School, and Daniel, a green entrepreneur, and two grandsons, Jacob and Samuel.  He also has a son, Steve, from a prior marriage, a retired union organizer, with four children, Joseph, Audrey, Sophia and Isaac.