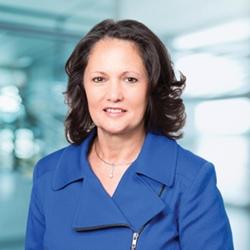 Patricia Santelle RLAW’85 is involved in many pro bono and charitable endeavors, including her firm’s support of Philadelphia schools.

She enrolled at Rutgers Law in Camden and began developing litigation and leadership skills that would set her on a path as a successful attorney in the field of complex insurance coverage. “I knew I was going to get the best legal education, which I got, but what I didn’t expect was all the practical experience,” she said.

She also served as president of the Student Bar Association while at Rutgers Law in Camden. “That gave me my first experience in a leadership role, which was really valuable—leading students, and dealing with the faculty and the administration,” she said.

Santelle, who earned her law degree in 1985, is chair emeritus of Philadelphia-based White and Williams, where she served for seven years as managing partner and chair of the executive committee. When she took the top position in 2013, she became the first woman to lead a major law firm in Philadelphia. After she stepped down in 2020, the firm had grown to more than 200 attorneys and had 10 offices in six states.

Santelle has long been involved as an alumni leader and student mentor, and strongly encourages other alumni to get involved. Earlier this year, she received the Arthur E. Armitage Sr. Distinguished Alumni Award from Rutgers Law in Camden, and in 2010, she received the Scarlet Oak Meritorious Service Award from Rutgers for her contributions. She is now co-chair of the executive committee of the newly established Rutgers Law Alumnae Network, which supports women alumni and students. “I like to call it the Women of Rutgers Law,” she said. “Any opportunity to give back to the law school is meaningful to me. This one is a great fit, because of my experience as a law alumni leader and female leader in the law.”

Santelle often mentors women attorneys and shares with them her experience as a leader. “I don’t try to fit a mold that is a male-centric one,” she said. “I act like myself. I think that’s helped me maintain a positive attitude, consistency, and to have confidence in what I do.”

Santelle takes great pleasure in serving the community, supporting charitable projects, and doing pro bono legal work. This year she has handled cases for seniors, homeless people, and others in need. “It’s so important to take the talent that we have been given to provide access to justice for all people,” she said.