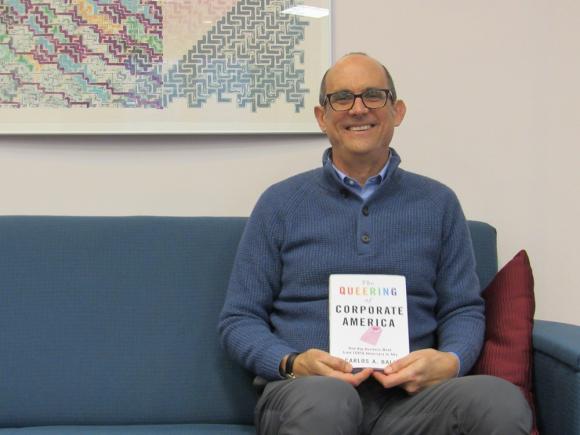 Professor Carlos Ball, a national expert in LGBTQ rights, has published a book called "The Queering of America" looking at corporations and their stances on LGBTQ equality.

What led you to write your book The Queering of America?

I was struck, a few years ago, by the ways in which large corporations were coming out (no pun intended) against the passage of anti-LGBTQ laws such as so-called religious freedom laws and transgender bathroom laws. Partly in response to strong criticism by corporate America, several states, including Arizona, Indiana, and North Carolina, rescinded their anti-LGBTQ laws. That made me start wondering why corporations were taking such public stances in favor of LGBTQ equality, while remaining generally neutral on other so-called hot button social issues. What I uncovered was a long history of LGBTQ activism aimed at corporations that began shortly after the Stonewall riots and that played an instrumental role in pushing large companies to embrace policy positions favoring equality for sexual minorities and transgender individuals.

I've written several books on the history of the LGBTQ movement. Before this project, I had focused, like most commentators, on the movement's demands of the government, either to stop discriminating itself or to prohibit the private sector from discriminating. But as I started doing my research for this book, I realized that my focus up until then had been too narrow, and that I had not paid sufficient attention to the ways in which early activists in the 1970s and 1980s sought to apply pressure directly on large companies to stop discriminating and to support LGBTQ equality positions. So I would say that I was already attuned to the effective pressure tactics of LGBTQ activists and what I did with this project was to expand the lens to cover activism aimed at the corporate sector.

Who is the audience for this book? What do you hope readers take away from it?

The book is written with a broad audience in mind. Although I hope that academics in my field and in that of corporate law will be interested in the book, my main audience are well-informed general readers. Fortunately, the book is being published at a time of ongoing discussions about the role of large corporations in our society. For example, the Business Roundtable issued a statement last summer arguing that corporations need to not just look out for the interests of their shareholders, but also their employees, customers and the communities where they are located. And so we’re starting to see – on issues like gun control, on immigration reform – corporations take more public stances, sometimes supporting progressive policy positions. I find these conversations about the role and responsibilities of large corporations in our democracy promising and helpful. I’m hoping that my book can be part of those conversations.

What were the key findings you learned while writing this book?

One key finding is that is that post-Stonewall LGBTQ activism targeted large corporations because the firms’ interests in promoting and protecting their brands made them particularly sensitive to the negative publicity that came with exposing discrimination. Large corporations spend millions of dollars developing and marketing their brands and are, as a result, highly sensitive to criticisms that might tarnish those brands. Queer activists through the decades have sought to use that susceptibility to pressure companies to change their policies and practices as they relate to sexual minorities and transgender individuals. Interestingly, in the decades after Stonewall, corporate interests in protecting their brands made companies more willing to change explicit anti-LGBTQ policies than government agencies.

Corporations are interested, above all else, in increasing revenues and protecting their individual bottom lines. As a result, a crucial reason for the queering of corporate America has undoubtedly been the recognition by large companies that, as the country changed, adopting and supporting LGBTQ rights positions could help them maximize profits by reaching new customers while hiring and retaining the most qualified employees. But another key conclusion of my book is that accounts of the queering of corporate America that focus only on these bottom-line considerations miss other important and compelling aspects of the story. One of those is the crucial role that LGBTQ rights activism, through the decades, has played in encouraging and pressuring corporations to adopt LGBTQ-friendly policies. Another is the extent to which some corporate executives and board members, on different issues of importance to queer people through the years, have come to embrace LGBTQ equality positions not only because it helps their companies compete in the marketplace, but also because it is, quite simply, the right thing to do.

Talk a little about yourself:

My area of expertise is on the intersection of LGBTQ issues and constitutional law. I have written several books on that intersection, including ones related to the First Amendment, same-sex marriage, and parenting rights. I came to Rutgers in 2008 after teaching at the University of Illinois and at Penn State for a combined thirteen years. As my employment track record shows, I have always been attracted by the mission of large public universities in increasing opportunities for a wide and diverse segment of the student population. I feel fortunate to work at an institution that values public service, excellent teaching, and first-rate scholarship.

Where can people buy the book?
I was fortunate enough to have Beacon Press, a trade publisher, publish the book. As a result, the book is available for purchase from any bookstore or online retailer.