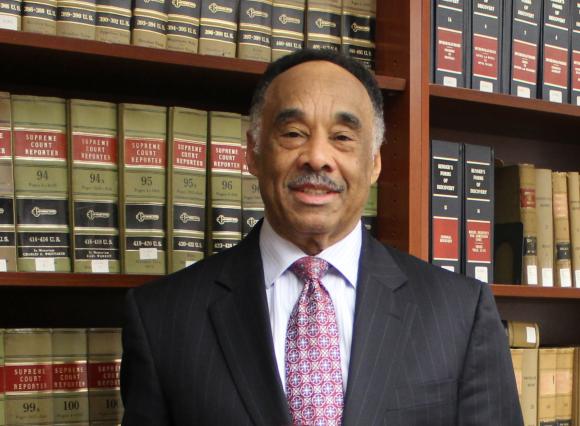 Professor Bob Holmes was honored by Rutgers University with the Clement A. Price Human Dignity Award.

As an African-American student at Ivy League universities in the 1960s, Robert “Bob” Holmes, said he experienced firsthand what it was like to attend institutions that lacked diversity and inclusion.

Throughout his life, Holmes became a barrier-breaker, both by example and by ideology – as the highest-ranking African-American in state government when he served as Assistant Commissioner of the New Jersey state Dept. of Community Affairs under Gov. Brendan Byrne, and as the first African-American partner at Wilentz, Goldman and Spitzer. He also worked as the Director of Development and the Director of the Watershed Corporation for the City of Newark

Holmes joined Rutgers Law School as a clinical professor in 1997. He founded the Community and Transactional Lawyering Clinic, a clinic that provides pro-bono services to corporations, including non-profits and small start-up businesses, while providing law students experiential learning.

He was recognized for his life’s work recently when Rutgers University honored him with a Clement A. Price Human Dignity Award. Both Rutgers University President Robert Barchi and Rutgers University-Newark Chancellor Nancy Cantor presented the awards at a ceremony at the former law school building in late April at 15 Washington St.

This year’s awards, which were selected by The Committee to Advance Our Common Purpose, were renamed for Clement A. Price, a beloved Rutgers University professor and Newark historian who died unexpectedly in November 2014.

“It is an extraordinary honor for me to have my name and my work associated with Clement Price,” Holmes said at the ceremony. He reflected on the award, “Policies related to diversity and inclusion are not self-executing nor are they self-sustaining. Such policies require dedication and effort to achieve and constant vigilance to maintain. . . . It is particularly important for Rutgers-Newark and Rutgers Law School to continue to promote diversity and inclusion because these principles have become an essential part of the reputation and brand of these institutions as well as part of a commitment made by them to the community of which they are a part.”

A native of Edison, N.J., Holmes comes from a family who had a strong commitment to open doors for minorities. There is a public housing complex named after his father, a junior high school named after his aunt, and his mother was a founding member of a medical center. Holmes said working with law students at the clinic he started not only builds their confidence and helps them be more successful as attorneys, but also assists underserved members of the community and promotes economic success and diversity by assisting business owners in Newark.

Holmes’ accomplishments were detailed in a letter prepared by his colleagues in the law school clinical program. Among the highlights are:

Expanding the program to advance private entrepreneurship with interdisciplinary collaboration along with the New Jersey Institute of Technology, the Business School, and the Center for Urban Entrepreneurship and Economic Development.

Assisting entrepreneurs and inventors and obtaining a $300,000 federal grant to launch the Lautenberg Entrepreneurial Assistance Program.

Handling major transactions including a $30 million transaction with a French pharmaceutical company and giving counsel to develop the University Science Park property.

Holmes also has earned the respect and esteem of his colleagues at Rutgers Law School.

Rutgers Law School Co-Dean Ronald K. Chen said, "There is no more fitting living tribute to Clem Price's memory and ideals than Bob Holmes.  Their shared devotion to their community and to social justice makes this award particularly appropriate."